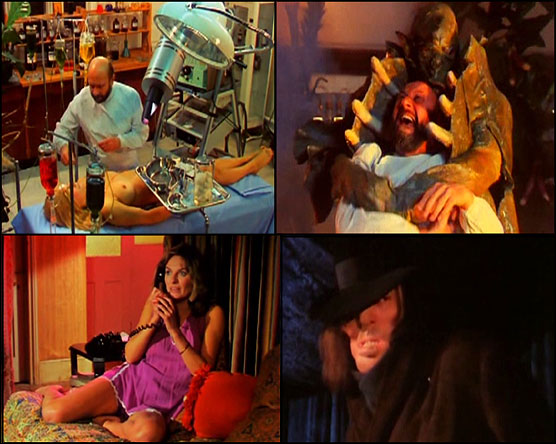 The Freakmaker (1974) aka The Mutations

If you want to catch a film that contains a dabbling of virtually every exploitation element from the B-movie pantheon, then The Freakmaker may just well be your cup of tea. Not only to we have a smattering of nudity, monsters and gore, but we also have real- life ‘freaks’ to gape at as part of the storyline. These people are used in a manner attempting to mimic Todd Browning’s classic Freaks but this production doesn’t really have the soul and artistry of Browning’s vision. We also can experience what must surely be one of the most wooden performances of all time from Donald Pleasence, playing the mad scientist of the piece, Professor Nolter.

After the opening credits we are then shown the growth of plants in time-lapse footage which leads us to believe we’re actually watching a nature documentary. Finally, we launch into the film proper. Professor Nolter is giving a lecture to college students on evolution and mutation, boring them all silly. Student friends Tony (Scott Antony), Bridget (Olga Anthony), Hedi (Julie Ege) and Lauren (Jill Haworth) leave for more down-to-earth endeavours. Taking a solitary walk, Bridget is menaced by a pair of dwarves, Burns (Michael Dunne) and an unnamed cohort. Running into the woods, she’s finally ambushed and kidnapped by a hulking figure.

This shadowy giant proves to be Lynch, Doctor Who actor Tom Maker unrecognisable under layers of hideous makeup. Lynch is in fact Nolter’s assistant and brings the girl to Nolter’s laboratory. The Professor is surrounded by pulsating, carnivorous plants and gives the unconscious girl, topless under a sheet on an operating table, an injection of a mysterious serum. We then rejoin the college friends who welcome one of Nolter’s associates Brian Redford (Brad Harris) at the local airport. They take a shine to the man but are becoming increasingly concerned at the disappearance of Bridget. Going to a local carnival, they go to the ‘freak tent’ run by Burns and Lynch. There we meet the deformed people who have made their home there. The man who can ‘pop’ his eyes out of their sockets. The alligator lady. The bearded lady. The human skeleton (obviously an unfortunate woman with severe anorexia nervosa) the human pretzel, ‘frog boy’ and several other little people. The college friends then almost go into the crocodile girl’s tent – who billed as the most unusual of them all - but seeing various patron’s disgust puts them off.

Later on the circus folk are having a birthday for one of their number and offer the surly Lynch some cake, letting him know he’s ‘one of them’. This drives him into a frenzy of drooling hatred and he smashes up their party. This scene is cribbed from Freaks but offers nothing in the way of real storyline. Burns and Lynch are at loggerheads in the background, Burns being aware of what Lynch is up to in his spare time. Lynch supplies Nolter with victims as long as Nolter will keep his promise, to make his face normal. Burns wants out of the arrangement but Lynch forces him to cooperate.

Brian visits Professor Nolter and hears all about his theories about splicing plant genes into humans to create the perfect hybrid, requiring no food, only sunshine and water. He’s somewhat dismayed as Nolter places a live rabbit into the maw of a giant carnivorous plant. In the meantime, after trying to investigate some suspicions of the Carnival, Tony is captured by Lynch. Now they’re all really worried with another of their number missing. The circus folk begin to rebel against Lynch and his harsh ways. Lynch and Burns now have to deal with the fact that Bridget, the unfortunate victim who became the alligator-girl, has died, like all previous experiments have. Burns has had enough. As the drama unfolds, Tony escapes Nolter’s lab but the poor man has been transformed into a monstrous plant-human hybrid – a venus fly-trap man. After attacking and digesting a homeless man with the giant maw on his chest, he breaks into Lauren’s apartment and terrifies her into catatonia. He then visits Hedi (after we get the inevitable nude bath scene) but Lynch intervenes, kidnapping the girl and taking her back to Nolter.

Finally the carnival folk have had enough and rebel again Lynch. Pursuing him in Nolter’s grounds, Burns and the group throws knives into him as he bellows that he’s one of them, finally falling into a pack of snarling, tearing dogs that finish him off. Brian witnesses the gruesome spectacle as he approaches Nolter’s house. Within, the Venus Fly-Trap Man attacks Nolter and digests him in a nicely gruesome scene, setting the whole place on fire as Brian makes his way in and rescues the nude (of course) Hedi. He wraps up the girl in a sheet and takes her back to his car. Nolter and his creations, including the unfortunate Tony, are consumed by the fire. Back in the car, there’s a final twist for Brian and Hedi … can you guess?

An ugly film for the most part, Jack Cardiff’s The Freakmaker also known as The Mutations is still worth a look for several reasons. We’ll probably never see people who are born differently to the norm used in this way again, for good reasons … a time capsule from the seventies? The Venus Fly-Trap man is actually quite an impressive monster, although with a completely fixed, inexpressive face. He’s certainly unique the way he oozes through windows and attacks people with his “fly-trap”. We don’t get to see Bridget transformed other than as a similar looking head protruding out from some straw … I guess the budget didn’t stretch to two plant-human hybrids. Donald Pleasance gives surely what must be the most wooden performances of all time with his Professor Nolter. It’s actually quite hypnotic. I’m not sure if his Germanic-voiced character is meant to be this way, or if he’s just phoning his role in. I wouldn’t want him to be my lecturer, it’s a guaranteed snooze-fest of a lesson, I can promise you. Tom Baker, the renowned Doctor Who actor, is a completely different story as Lynch. Under quite horrible-looking makeup he raves, drools, growls and screams and even has a softer scene with a prostitute, just asking her to say he loves her. I expected that scene to end in rejection and murder but to my surprise, it’s a more-or-less subtle study of his character. Baker seems to have absorbed all of Pleasence’s acting energy and more than makes up for the emotionless Professor. The rest of the actors are fine with Julie Ege from Creatures the World Forgot being the standout College student. She’s a Nordic beauty doing the requisite, and very brief, nude scenes. Ms. Ege does have a classic beauty about her, and has a quiet dignity in her dialogue scenes.

The music by Basil Kirchman’s also worth noting, having an surreal, jazzy feel to it. It definitely seems to be made for a higher calibre film. I appreciated the slow-motion plant dissertation at the start of the film, it lent an air of class to the film that it lacked elsewhere. Not that a film like this even needs ‘class’! The various deformed and short-statured people that make up the group of ‘freaks’ are generally treated okay within the context of the film, with only Lynch (who is normal underneath the makeup) being the malevolent ‘monster’. Most of the time the carnival folk are pulling together, supporting each other and just trying to live their lives, unless they’re parading their oddness in front of the carnival rubes. There they pop their eyes, swallow swords or display their odd skin and bodies. Still, you have to wonder what the general public understood about Anorexia Nervosa when a poor victim of it is considered a ‘freak’ by the film-makers.

We don’t often see the plant connection in horror films and science fiction, and this is one of the few movies to actually blend plant and human as a possible creature. It perhaps could have occurred in a loftier production, but it takes all types to make up the world of cult cinema. If you want to experience this world you may need to see The Freakmaker!