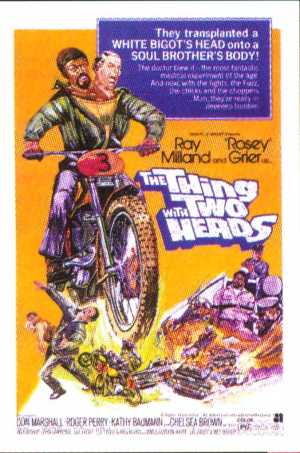 This is one confused little movie. Great fun, but I don't think it's sure if it's science fiction, comedy, action-thriller, redneck-chase movie, Blaxploitation, Whitesploitation, Headsploitation or even plain-and-simple Ray-Millandsploitation! It contains a lot of enjoyable viewing though, so even though it doesn't hold together that well or have much of the requisite sleaze that makes it a front-runner in GGG, it's well worth a look.

A racist, dying scientist Dr. Maxwell Kirshner (Ray Milland) is head of a transplant clinic doing pioneering experiments. A two-headed gorilla is the result of one of these experiments. Soon, one of the heads is removed and the operation is considered a success. Just as well, because, slowly perishing from a chest tumour, Kirshner wants to perform the human version of this bizarre accomplishment. They will find a donor - live - body, transplant Maxwell's head onto the body then remove the donor's head later. Mmm, nice.

Black Jack Moss (Rosey Grier) is on death row for a crime he didn't commit. When the transplant clinic approaches the prison for a clandestine donor, Moss volunteers, figuring he can clear his name in the thirty days of extra life he is going to obtain. The operation - a fairly creepy, serious scene as Kirshner's head is removed - is a success, and the Thing with Two Heads is born! But soon, it will be a black body with a single white racist head. Kirshner can't believe what's happened, but Moss is fully in control of the huge body and escapes with a black doctor in tow, whom Kirshner had belittled. Soon squads of dumb-ass cops are on the trail of the Thing with two heads on a dirt-bike, with the doctor riding with them. Kirshner tries all he can to convince Doctor Philip Desmond (Roger Perry) to kill off the head of Moss, that he will make him a partner in his organisation once Moss's head is removed. Of course, all the dumb-ass cops crash their cars and Moss/Kirshner escapes to find Moss's girlfriend, (Chelsea Brown) who is working to clear his name.

As Desmond and Moss eat with the girlfriend and listen to Kirshner's racist rantings, they soon realize what must be done. Moss is capable of the simple operation to remove Kirshner's head. In the meantime though, Kirshner's head is beginning to take control of the huge body and knocks (a funny scene) Moss's head unconscious. Who will survive the final battle of the heads, and be able to sing "Oh happy day"? I won't say, but I'm sure you can take a guess.

With so many genres clamouring for attention in the one film, it can't help but be a somewhat diluted viewing experience. It's not extremely funny, thrilling, frightening or charming. And there were other two-headed transplant movies from the seventies, like The Incredible Two Headed Transplant from 1971! Still, Director Lee Frost has fashioned a nice little entertainment that does at least highlight the problem of racism in a totally absurd way. Ray Milland is usually worth a watch, and though he spends part of the movie as an unmoving plastic head, at least makes the most of his role with a nasty performance.

The Thing With Two Heads is also probably worth it for the dirt-bike versus multiple cop-cars chase scene. This has to be one of the longest police-car smash-em-up sequences in filmic history! Yee-haa! The redneck in your Uncle Boris loves scenes like this. Now if only a few scantily-clad heroines in cut-off Daisy-May denim shorts were watching (or participating in) the action, that would have been perfect...

I know, I'm a hopeless case.