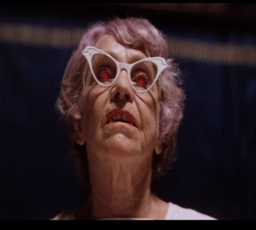 Producer Anthony Ginnane has contributed much to the pantheon of Australian cult cinema. He's responsible for titles such as Turkey Shoot, Snapshot and as yet unreviewed, The Survivor. There aren't many people making movies of a cultish nature down under, so films like Thirst are a welcome addition to this small collection. Hey, it's an Aussie Vampire movie, so really has to be worth a look. That said, it's quite an odd little movie that moves along in it's own weird way, in a quite one-note but compelling fashion.

The first scene, as the credits roll, is Kate Davis (Chantal Contouri) emerging terrified from a coffin. We're thrown straight away into her nightmare, then thrown back a month to see Kate in her normal life. She has a boyfriend Derek (Rod Mullinar) whom she sees on a irregular basis, but as soon as she goes on some sort of beach holiday, she's kidnapped by a strange group of people.

We soon find out that these weirdos are a cult of Australian vampires who live on a sort of private resort, and somehow get away with farming young people as sort of blood-cows. When they need blood, the "vampires" strap them to tables in a soporific state, then drain the blood from their necks through special tubes. It seems that Kate, according to the vampires, is a descendant of the Countess Elizabeth Bathory, famous historical vampire. Certainly the painting the cult shows Kate looks like her. Now, these vampires are not like the traditional garlic and crucifix types. Their eyes glow red as they are about to strike a victim, but that's about it. Their fangs are artificial metal ones, they can move about in daylight and have no supernatural powers. Really, they're just people whose eyes glow somehow, and like to drink blood! Still, they're determined to convert Kate to their fold, and are using various drugs, sensory deprivation techniques, confinement and hallucinations to achieve this conversion.

Now, poor Kate aside, there is a clash of approaches happening on the sidelines. The evil Mrs Cameron (Shirley Cameron) is using the hard conversion methods we see through most of the film. But there's also Dr. Fraser (the David Hemmings) who seems a bit more kindly and wants to convert Kate in a gentler way. There is infighting in the vampire camps, and when Kate is in the processing of fully converting, she is let back into the general public for the final test. She unwillingly attacks Derek and another woman, and then is brought back into the camp along with Derek for the final conversion. Dr Fraser intervenes, seemingly out of sympathy for Kate and Derek. But can you ever really trust a vampire?

As I said at the start, 'tis an odd little film we have here. In it's own way, it's basically only about the prolonged mental torture of a hapless woman. There really aren't many wonderful outcomes for our Kate, but I won't spoil the ending too much. Actually the ending confuses me somewhat - but to explain my confusion would probably reveal too much information. See for yourself, I guess. The film has a good, at times gothic look to it, and Chantal Contouri seems committed to the role of the vampire-in-training. Most of her role is displaying her suffering and she does well here. In the end though, it's not really an "actorly" piece (or even a story piece), more of a mood film with some great scenes.

Worth a look, as one of the rare Australian horror movies if nothing else. For fans of vampires, there's a bit of a different take on the undead that may capture your interest for the running time.