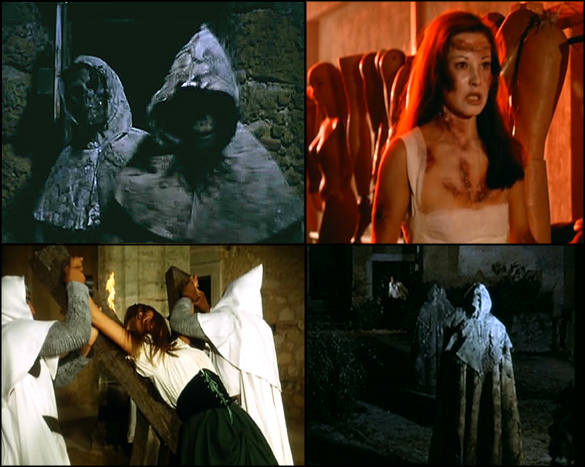 The fact that Spanish director/co-writer Amando de Ossorio's Tombs of the Blind Dead spawned three sequels is a pretty impressive feat for a little low-budget Spanish/Portuguese co-production made in 1971. Most horror fans are familiar with the effective title, but is it actually a good film? Well, other than a few lapses in logic which can be prised out if you're picky, Tombs still packs quite a violent wallop for a film that's over thirty-seven years old. Far from being disabled in any way by their 'blindness', these vampiric zombies are aggressive, and won't have any problem tracking you down if your heart's still beating! 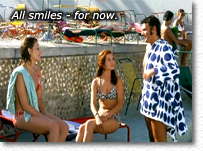 After some creepy opening titles exploring abandoned ruins, we're introduced to the living participants in our little drama. Young Virginia White (Maria Elena Arpon) has run into her old college friend Betty Turner (Lone Fleming) at a seaside resort in Spain. They're initially happy to meet up after all these years, but then Virginia introduces Betty to Roger Whelan, (Cesar Burner) her casual fling. Virginia's jealous when Roger obviously shows more interest in Betty, as soon as he lays eyes on her. A smooth talker, Roger convinces the initially reluctant Betty to join them on a holiday in the country. While Roger and Virginia wait impatiently at the train station, eventually Betty turns up. After some meek resistance, Betty agrees to join them on the train trip into the countryside. After Roger claims Virginia means nothing to him, he and Betty begin flirting. Nonetheless, Virginia gets upset about the whole affair. She thinks back to a time when she and Betty were in College as roommates, experimenting with some cutesy-pie lesbianism together. Frustrated and jealous, Virginia asks the ticket-seller to let her off the train. For some reason he appears to be afraid of stopping, and won't do it. She takes matters into her own hands, grabs her bags and jumps off the train. 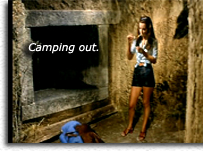 Virginia wanders aimlessly, until she comes across some abandoned monastic ruins. She undresses, lights a fire and beds down for the night. Unbeknownst to her, tombs, graves and crypts are opening up all around her. Skeletal hands are emerging from the shadows, and suddenly Virginia realises she's under attack by a horde of slow-moving, mouldering zombies! Hooded and cloaked with rotting robes, the creatures lay siege to Virginia until she manages to escape outside, and mounts a handily-available horse. No sooner does she begin to make her escape, than the dead give chase on horseback as well! Now, this scene is quite effectively creepy in slow-motion, but I just found the idea of these very slow-moving undead mounting horses, then managing to catch up with someone who had already been galloping off in fear of their lives some minutes before, a bit hard to swallow. Still, if you accept films such as this as surreal and dream-like, which often Tombs is, then really, it's not a big problem. The undead soon catch up to Virginia and swarming around her, we leave her to her screaming, off-screen death.

Concerned about their friend, Roger and Betty begin to do some investigating. Back at their resort, they're told about the local fear of the area where Virgina jumped off at, by the superstitious young waitress at their restaurant. Betty and Roger travel back to these ruins and begin to look around, but run into some police who tell them Virginia's been murdered, and that the body needs to be identified. They travel back to the morgue and are sickened by the sight of their friend's corpse, covered in savage bite marks. The coroner tells them that none of the wounds were fatal - that Virginia's death was due to being drained completely of blood. Later that night, a demented morgue attendant who plays with frogs in a tank is killed by the re-animated corpse of Virginia, who has now becomes a shuffling, wound-covered, blood-thirsty zombie herself. Virginia rises from her table, the sheet half-covering her body, sneaks up on the snickering man, and bites his throat out. 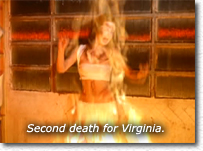 Betty and Roger won't rest on the case, and approach an historian who's an expert on the medieval area, where Virginia died. He tells them about the Knights Templar, a sect of Spanish Knights who, after returning from the Crusades, brought Eastern mysticism with them, making their symbol the Egyptian Ankh. Worse though, they sacrificed local virgins to the Devil in an attempt to gain eternal life. We are show graphic footage of the Knights binding a young woman to a cross, and slashing at her bared breasts with their swords. They then gather around her, and drink the blood from the wounds. It's pretty nasty, bloody stuff and her piteous screams on the soundtrack can't help but disturb, and make me pity her. After more sacrifices, eventually we see in medieval pictures that the beleaguered villagers rebelled, and the Knights were all tried and hanged. They're left to dangle and rot, and the crows peck their eyes out soon afterwards. So began the legend of the evil blind dead, who sucked the blood of the living to remain in a state of Hellish eternal life. After the historian's finished his tale, a detective approaches and mentions to Betty and Roger - in front of the upset old man - that the historian's son, who abandoned his father years ago, is now a notorious smuggler and could have something to do with the murder. They resolve to go back and take matters further. Meanwhile, the undead Virginia stalks Betty's assistant in her mannequin factory. The mannequins offer an unsettling backdrop, as the young woman is shadowed by the female zombie. Finally Virginia emerges and the two 'women' struggle. The girl knocks over a kerosene lamp and the unfortunate Virginia agonisingly dies a second time, incinerated by accidental fire. It's all a bit sad, as not only was she nastily murdered once by these 'Blind Dead', she's obviously suffering as she burns to death a second time.

Betty and Roger return to the area and track down Pedro Candal (Jose Thelman), the historian's son who's a waterfront smuggler. They convince him they're not police, and also that the police are going to pin a murder on his operation - that he was executing people who know too much about his activities in this so-called 'haunted' area. Pedro then wants to go with Betty and Roger to get to the bottom of things, and clear his name. His rough-and-ready sometimes-girlfriend Nina (Veronica Llimera) wants to go along too, more out of mistrust for Pedro than anything else. They arrive at the ruins, and soon seperate after some squabbling. Roger claims Betty means nothing to him to Nina, and Pedro wants to go for a 'walk' with Betty. After some grilling from Pedro, Betty reveals she's a virgin, because she's uptight about men. After an insensitive pass by Pedro, Betty wants to leave, but is soon hit by the brutish man, and he attempts to rape her. It's not clear later whether he's succeeded but the despondent Betty flees the scene and the Blind Dead rise again, cornering Pedro and draining his blood in a far gorier attack than Virginia's death. Ignorant of this, Nina and Roger are coming together in a more gentle fashion and kiss, but nothing really comes of it, and soon they hear the church bells ring. Betty screams it's not her, that they're ringing on their own. Roger's soon violently attacked by the dead, who cut off his arm with their swords, and kill him as he tries to get through a door to safety with Nina and Betty. Betty and Nina fight over a gun. The dead slowly enter and surround Nina, killing her too. Betty tries to remain silent as the dead search for her - if only she can remain utterly silent these blind monsters can't find her. Unfortunately, her terrified heart-beat gives her away. They hear the sounds of beating fear and advance, again giving chase on horses. Betty tries to escape, and makes it to the same train which brought them here - with the Blind Dead in hot pursuit. Can anyone be safe when the Blind Dead actually board the train, and begin slashing and slaying everyone in sight? 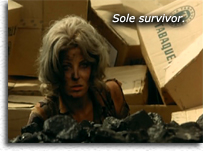 De Ossorio's created an efficient and effective little shocker with Tombs of the Blind Dead. The silent, slow-but-determined creatures are well-realised with rotting rags and detailed, fixed skull-masks. I appreciated the skeleton hands reaching out from the decayed sleeves, rather than made-up, all-too-human hands. These monsters seem easy to escape from, but if they can hear a heartbeat - through non-existent ears which seem to work fine, but let's not be too picky - then victims probably don't have much hope once the undead things are on horseback. That most of the horror sequences happen in shadowy dark old ruins also helps the overall mood of dread. The slow-motion scenes work, they're not over-used and enhance the creepiness of the Blind Dead. I have to say though, that women seem to cop it badly in this film. They're drained of blood, have their breasts repeatedly slashed in a bloody sacrificial ritual and are then killed, others are burned to death, another is beaten and raped, or at least a rape is attempted, it's not completely clear. Does De Ossorio have a problem with women? You be the judge. Still, any potential misogyny aside, none of the characters in Tombs are particularly likeable. They're all a bit neurotic, uptight, manipulative and jealous. This may have been an intentional distancing tool as there's not many left of them by film's end! De Ossorio's gone all out to deliver a big-impact ending, and I'd better not reveal too much here tonight. The minimal music's sparingly used, but the evil Gregorian chanting which represents the ruins and our friendly Knights, adds to the prevailing atmosphere of Satanic gloom. The use of real locations for the old temples of the Templars, also adds realism and menace to the proceedings.

Those that read these pages on a regular basis can probably tell when I adore a film, and am particularly passionate about it. I'm afraid I can't quite muster that kind of passion for Tombs, even though it's clearly a quality production and features some very original zombies, a type of monster I'm very partial to. Perhaps the flat nature of the human characters diminishes it slightly for me. The Templar sequences are the undoubted highlight of the film, which is probably as it should be. It's enough to say, then, that we've got a violent, atmospheric, violently sexual - rather than ever being sexy, as such - supernatural chiller on our rotting hands. Tombs of the Blind Dead is well worth viewing and owning for horror completists, despite my small reservations. Eventually I'll be reporting with interest on it's sequels, in the fullness of time.