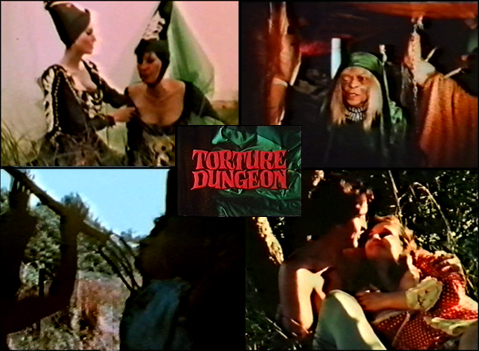 I'm a bit mystified by exploitation auteur Andy Milligan's Torture Dungeon. It's got all the trademarks of Milligan's work, including bizarre, wobbly camerawork, home-made period costumes, a micro-budget, some blood and some nudity. But if shoehorning a film into a genre is a required thing, what genre is this odd, nasty little work? With a title like Torture Dungeon, I can only imagine it was distributed to the drive-ins and grindhouses - or wherever it played - as a gore-filled horror film akin to a Herschell Gordon Lewis epic like Blood Feast. Yet, there isn't all that much gore in this dungeon, what we have on our hands resembles more a violent historical play done in the inimitable Milligan style. Let's look at some plot details first.

As with all Milligan's films, Staten Island is the shooting locale and here it stands in for medieval England. We first see a nobleman who loves roses being surprised by his own attendants and beheaded in his own garden. His surviving relatives, Lady Jane (Patricia Dillon), Lady Agatha (Donna Whitfield) and half-brother Norman, Duke of Norwich (Gerald Jacuzzo) attend his funeral. There is also Albert (Hal Borske), a "half-wit" who picks his nose while carrying his brother's coffin. There is no love lost between Jane and Norman, and Jane reveals to a horrified Agatha that she is pregnant to her beloved dead brother - the nobleman decapitated - and blames Norman. She spits in Norman's face and has to be restrained, swearing revenge.

The governing council of the unnamed, plague-devastated country want to find a successor to fill the vacuum from their royal family. They convene to sort out the issue and Norman enters as well. It seems that the incapable Albert is next in line, then Agatha, Jane and finally the infertile Norman. The manipulative Norman suggests marrying Albert off to a local peasant girl, Heather MacGregor (Susan Cassidy), breeding an heir and ruling the country invisibly through the child. They cast their votes and decide to retrieve Heather to marry her off to Albert. Afterwards, we realize what a villainous cad Norman truly is. His offsider, the manic, hunchbacked jester Ivan (Richard Mason) is also his off-screen lover. For as Norman says, as he forces a threesome with a servant girl, himself and Ivan, he's a 'tri-sexual' - because he'll try anything for pleasure, which is second in his mind only to power.

We finally meet Heather, frolicking naked in a muddy stream with her lover, William. After this happy reverie, Heather is told by her father that she's required to be a nobleman's wife. The one-eyed woman (Maggie Rogers) who is his father's friend agrees it is the only thing to do. William has other ideas, and convinces Heather to run. While waiting for Heather to meet him, William's brutally murdered by hooded executioners. This is the most gruesome scene in the film - William is knocked into a stupor, nailed to a wall by his hands, has a pitchfork rammed into his chest as is then stabbed in the stomach by his assailants. Nasty! Heather screams as she discovers him and the camera spins into a Milligan-swirling-frenzy.

Heather is then reluctantly taken to the royal house, and schooled in the ways of being a Queen. There's a ridiculous scene which goes on forever with "Magda" the marriage counselor, which is meant to be light relief. Agatha and Jane show Heather the true nature of Norman's evil. In a dungeon, various victims of Norman's wrath hang moaning and bloody, missing legs, tongues, and various other bodily components. Heather runs screaming and the one-eyed woman mysteriously enters, discovers the pathetic victims and screams she will get revenge on Norman for them. Heather goes through with the wedding, and is forced to have clumsy off-screen sex with the half-wit Albert, who barely knows what's going on and has to be coached by Norman. After Heather leaves, Albert is killed by a stake through the heart. When Agatha and Jane realize how ruthless Norman is, they flee and are killed by Norman and his hooded henchman. Heather herself escapes the carnage, and is attacked by one of the hooded men, who reveals he can't kill her because he loves her. Ivan the hunchback attacks the turncoat and they both end up messily dead in the fight. The murderous Norman turns up, now that all the competition for the kingdom, other than Heather, has been eliminated. Just as he's about to let the killing blow fall, the one-eyed woman shows up. Will Heather be saved, and a startling revelation about her connection to the kingdom, and the one-eyed woman, be revealed? Or will the decadent Norman prevail, and wipe out everyone standing in his way?

For sheer uniqueness, the works of Andy Milligan are worth a view and Torture Dungeon is no exception. It's almost the Milligan take on Macbeth, and we certainly experience a poisoned view of the world through the director's eyes. The acting is over the top for some characters, particularly Gerald Jacuzzo as the seizure-riddled, hedonistically evil Norman. Richard Mason as Ivan the hunchback is grating and manic with his constant jumping around and giggling, we can only assume he's acting as directed. The rest of the cast are more-or-less serious, and do their best. Milligan's costumes are actually quite impressive to this untrained eye, and they make up for the lack of sets on display. I can't even remember a scene with any sets in it!

As mentioned earlier, the gore is concentrated during the death of William, but all of the murders are quite vicious, a trademark of a Milligan film. There's a couple of nude scenes, mainly with the voluptuous Susan Cassidy as Heather. Despite a lot of sex talk there's no real sex scenes, other than the aftermaths. Those of you looking for a full-on sex-and-gore film may need to look elsewhere. Torture Dungeon is a dark little medieval fantasy-thriller-drama with no actual torture, again only the results of off-screen mayhem in badly-lit scenes. Enjoy this film for it's unique malevolence and threadbare 'charm', if you can. If shaky camerawork turns you off, I'd give this a miss as every murder is ended by a spinning camera for some reason. I guess Milligan thought it simulated the shock of viewing such an event, and it certainly is an odd, disconcerting effect.

For tolerant viewers, the cinema of Andy Milligan will help round out your experience of cult cinema from the absolute penny-pinching fringes. It's sometimes hard to sit through, and just as hard to forget.