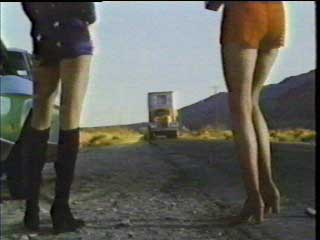 Well, if this-here little film with Claudia Jennings doesn't have the lot, served with ketchup and fries, little darlin'. I'm a fan of the seventies b-movie starlet, and you can't go wrong with drive-in classics such as Gator Bait, The Great Texas Dynamite Chase and quite a few others, including this little gem of 1974. It's loaded up with nudity, violence, country truckin' songs and a whole lot more. I'm-a gonna recommend it to y'all at the end, and this here is why.

Rose (Jennings) is the evil, feisty daughter of Anna (Lieux Dressler) who runs a truck terminal in New Mexico. It's a truck terminal with a difference, though ... being a front for truck hijacking, prostitution (Russ Meyer mainstay Uschi Digart being one of the delectable hookers) and smuggling. Rose and a henchwoman pose as stranded drivers, lure truckies to help them and conk them on the head - maybe even killing them. They then make off with the trucks, and Anna and her greasy henchmen repaint the behemoths and move on the stolen cargo. A perfect operation.

Not for long though. The mob wants to move in and take over. Two slimy mafioso, played by Dennis Fimple and John Martino, have already killed one associate and his nude girlfriend in their bath. Once they approach Anna and her team, the discontented Rose takes off with them, becoming the lover of one of them. They offer Rose a place in the rival operation, even as they bump off some of Anna's cohorts. Some are crushed by tricks, other hung. This means war. In the meantime, an old friend of Anna's, Seago (Paul Carr), wants her in on a big score. But is he all that he seems?

Anna tries to kidnap the wayward Rose and drag her back into the fold. Betrayal is afoot though, and as the treacherous Seago gets trampled to death in a cattle truck stolen by Anna (Anna causes the accident after she realizes he's on the other side) the final showdown occurs, western style, only this time with rampaging trucks driven by hookers making an entrance. Soon enough Mother squares off against Daughter in a final shootout.

This is the barest of bare plot outlines for you. The whole film is peppered with nudity (thank-you, Uschi and non-anorexic others), dumb sheriffs and hick-like characters. You've gotta love the trucks, and there's some great car-versus-truck-chases. Good truckin' music blares throughout the movie, lost of banjo-plucking and good-ole-boy warbling. Magnificent, and mid-way through the movie there's a whole trucking video about being, what else, a truck. Some people complain it halts the movie, but I loved it.

So, what about Claudia? She doesn't seem to be the star of the film, more just one of the ensemble. Her role is pivotal, though - and yes, she gets her clothes off a few times. I always fast forward during those bits ... Everyone is pretty mean in this movie and she's no exception, playing a real Jezebel, as it were. Still, it's a Claudia movie and I have no complaints. The acting from all concerned is pretty over-the-top, but really, this slice of seventies drive-in fare isn't Shakespeare. Director Mark L. Lester isn't a great filmic technician, but the throw everything into the pot approach, coupled with the superb music make this little rig well worth taking for a haul.

And it's a Claudia movie. Did I mention that?