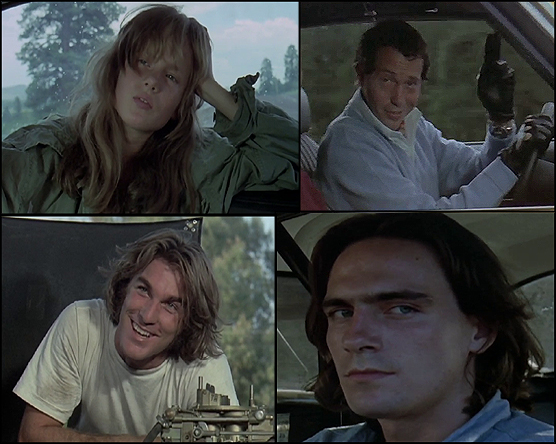 One of the ultimate cult films from the seventies, Two Lane Blacktop still proves an enjoyable and thought-provoking watch nearly fifty years later. Deceptively simple in its story and imagery, you may still be left feeling gutted in the film’s final frames. Who would have thought singer James Taylor, who to my knowledge has not acted before or since in a movie, would be so effective, as well as Warren Oates who cuts a tragic figure as a lost middle-aged man looking for approval and affection. You’ve also got Beach Boys drummer Dennis Wilson as the mechanic of the piece, who also acquits himself well as another jovial but still lost soul. Due to a childhood fixation for Odd Rods bubblegum stickers, I still have a lingering visual enjoyment for hot rods. There’s a few of them nicely peppered through the film but Two Lane Blacktop is more about filling emotional emptiness with cars, than a visual parade of them. Is the film on a higher plane beyond it’s straightforward narrative, being ultimately about the hollowness at the core of American culture? You may need to see it for yourself, to answer this question. I suspect it hovers between the banal and the lofty, and maybe therein lies its fascination.

Known as something of a time capsule for driving Route 66, Two-Lane Blacktop starts in Needles, California and we meet our two protagonists, The Driver (Taylor) and The Mechanic (Wilson). They eke out an existence driving from town to town, egging on locals into betting on drag races and surviving on the takings. They drive a grey Chevrolet 150 hot rod which they look after like a loved one. When driving, the Driver never speaks and when he’s working on the car, the Mechanic never speaks either. They seem to have some sort of perfect symbiosis going on. This ‘perfect’ relationship is altered in Arizona when ‘The Girl’ (Laurie Bird) a teenaged hitchhiker gets into their car. Endlessly chattering away, the zen-like silence is broken by the Girl. She sleeps with the more outgoing Mechanic at a hotel,and begins to intrigue the Driver, who clumsily attempts to court her.

Enter a middle aged man played by Warren Oates known only as ‘G.T.O.’ because of the 1970’s Pontiac GTO he drives. He picks up hitchhikers and tells them a different (boastful) story of his life every time. Eventually he crosses paths with the drag racers in New Mexico, and a hostile competitiveness develops between them. He tries to pick up the girl but she just plays games with him. Eventually a cross-country race is proposed, with the winner keeping both cars. The Girl oscillates between both cars, but seemingly never sleeps with any of them again. The film becomes something of a road trip, as they travel east and occasionally meet up. G.T.O. tries to tell the Driver his sorry life story about being a TV Producer who lost it all, including his family, but The Driver doesn’t want to know – it’s all about the cars. G.T.O meets up with a gay cowboy hitchhiker (a memorable cameo by Harry Dean Stanton) but rebuffs his advances. The further they go, the more their intentions fall apart. The Mechanic ends up working on the Pontiac and driving it himself at one point. The race begins to lose focus. The Driver gives the Girl a driving lesson in the Chevy and gives up with her ineptitude, giving her a kiss in the process, but their relationship goes nowhere.

Stopping in Memphis, the young men compete at a racetrack and the Girl suddenly leaves with this middle-aged man who clearly has a thing for her. Seeing his opportunity for some sort of relationship – “If I’m not grounded soon, I’m gonna go into orbit” – G.T.O. abandons the race and leaves them to it. Realising they’ve been cast aside, the Driver tears after them with Mechanic, finding them at a roadside diner. Earlier G.T.O. had suggested he and the Girl go to Chicago and realising she’s just going to end up tied down, rejects him. The Driver suggests she comes away with them, but she wants none of it and leaves with a young biker, dropping her bag of belongings in the process. G.T.O. takes on another pair of hitchhikers and brags about how he won the Pontiac with his skilled driving of his custom-made Chevy. We then see our young drag racers back at the track, the Driver looking stone-faced and depressed as they begin another race. As the race starts, the soundtrack goes silent, the action drops to slow motion and the film-stock itself burns up. It’s quite a memorable ending!

It’s certainly possible to look at the relationships between characters and enjoy the film on that level. Oates particularly does well with the role of ‘G.T.O.’ and we get a sense of the despair behind all the lies and swaggering. It’s a pity all his hitchhikers are all weird and introverted as he’s clearly looking for connections on the road. Laurie Bird’s ‘Girl’ goes from a chatty, easygoing, sexually willing ditz to a disillusioned cynic by the end of the film, alienated by the Chevy men’s coldness and G.T.O.’s neediness. Both the Mechanic and the Driver are distant and car-obsessed but Taylor’s Driver takes the cake with inexpressiveness and inarticulation. It’s no wonder the Girl gives up on them all, although her new biker boyfriend doesn’t look much better. Whatever director Monte Hellman intended, it’s easy to see a critique of American culture and capitalism throughout the film. G.T.O.’s corporate life fell apart, and all he’s left with is one of the symbols of capitalist America, not that it brings him any happiness. The Driver and the Mechanic love only the Car – truly another character of the film - using it to survive, keeping the wheels of American society turning and barely speaking to each other. Even when they do speak it’s only about cars. When a real, communicative person enters their stunted lives – The Girl – the house of cards falls apart, and they are left with emptiness and desolation.

Hellman’s created a nice visual feast as well with various landscapes on display, some grassy and green, some arid and dust-blown, some wet and mud-strewn. It’s an America hostile to longhairs and anyone different, dotted with lost souls on the highway and bloody car accidents. Various hot rods and cars make their appearance and I imagine any genuine car fanatics in the audience would appreciate them. Still, Two-Lane Blacktop is more than a character study than anything else, with the focus on close-up and medium close-up. The men are often expressionless, but we can understand their states of mind through their actions and stilted dialogue. Music-wise Two-Lane Blacktop is fairly non-descript and probably more relies on engine noises! There’s a bit of Doors and Kris Kristofferson in there. Interestingly enough, neither Taylor or Wilson contributed any material. As the film burns at the end, we’re left with a bit to think about at whatever level suits us at the time. I do recommend viewers of offbeat cinema get a hold of this one and take a look, you don’t have to be a car nut to enjoy it. It’s a one-of-a kind experience in finding spaces of meaning in a cramped Chevy’s cabin, expressions on frozen faces and stories on roads that lead nowhere.