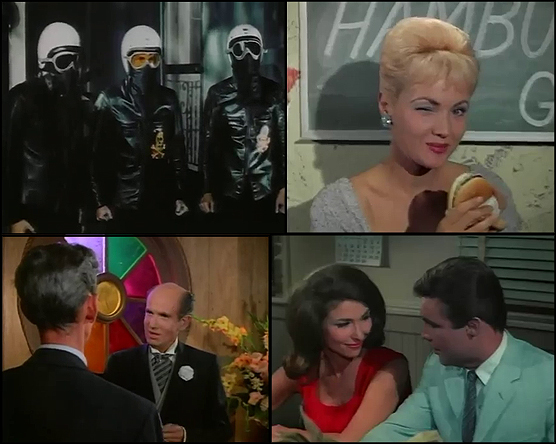 Sometimes, when choosing a film to watch, it’s refreshing to travel back through the decades and not expect too much from your cinematic selection. You can just appreciate the aesthetic of it, the perhaps naďve approach for the time, and the context. If I was to call The Undertaker And His Pals a horror film, well, strictly speaking that’s what it is. It’s also a comedy. Was I reeling back and cringing in terror at what I saw on the screen, doomed to relive the nightmare forever? Was I slapping my thighs and barely breathing with laughter? Neither. Nonetheless, I enjoyed this one a lot for what it was. A nifty little 1966 experience.

Sharing a visual sense with the world of Herschell Gordon Lewis, director T.L.P. Swicewood has added slapstick humour to the proceedings, which produces a hybrid effect that makes it quite unique – for the time, anyway. Of course, horror-gore comedies have been around for years now, but this has to be one of the first. Let’s take a look at some plot elements. In the dead of night, a trio of leather-clad bikers – as opposed to hairy, patched-up bikies – ride around town a few times then invade the apartment of a pretty blonde. She struggles for a few seconds, before succumbing to their knives. Then, in a Gordon Lewis moment, they cut off one of her legs and take it away with them! What the Hell’s going on in this town?

Detective Harry Glass (James Westmoreland) wants to know. Also working on the case is his assistant Ann (the gorgeous Sally Frei) who wants to marry the, for some reason, reluctant Glass. Glass also seems to have a fetish for the local greasy spoon diner, run by hoodlums played by Marty Friedman and Rick Cooper. Glass drags Ann along to the grimy place, where they find there’s only one thing on the menu … leg of lamb … get it? Glass and Ann are non-too-impressed by the quality of tonight’s special and leave. Meanwhile, the local Undertaker (Ray Dannis) is beginning the process of putting the murdered girl to rest, who also happens to be named … Lamb. Her grieving parents turn up to discuss payment, with the angry father ending up punching out the pompous schyster, for his insensitivity. He did, after all, complain about sewing on a plastic leg to the poor departed girl! Not to mention his outrageous prices for a cut-rate funeral.

In something of a surprise, Ann’s the next victim of the stalking, helmtted trio, who end up pushing and impaling her on a spiked metal fence. It’s almost a Hitchcock-Psycho moment – I’m maintaining perspective here – as I completely expected Ann to be around at the end of the film. Strangely, Cash doesn’t seem all that upset as he talks to the Undertaker about arrangements for Ann, but he’s definitely angry at the arrogant man’s attitude. In a slapstick moment, he pushes the snivelling character away and he promptly goes for an unintended ride on a kid’s skateboard, ending up flat on his face. In the meantime, part of Ann is being served up at the cockroach-infested diner.

Soon, the grisly truth is revealed to us. The Undertaker is in cahoots with the greasy spooners. They all kill victims together – women only, of course – saving money on food supplies and serving them up at the restaurant. Of course, this drives customers and business the Undertaker’s way. A hapless delivery man spots the evil shenanigans going on behind the scenes at the diner, and ends with a meat cleaver to the head. Seemingly completely recovered, Glass takes on yet another assistant, the vivacious blonde Friday (Warrene Ott) who is even more flirtatious than Ann, but she quickly ends up part of the scuzzball’s bizarre medical experiments as they drug and ‘operate’ on her intestines. Before too long she’s served up as hamburger. Later Friday’s identical twin sister “Thursday” (Ott again) shows up looking for her missing sister … and Glass and the equally feisty girl investigate. The evil bikers show up at a sauna, and whip a middle-aged woman to bloody death with a chain. Not a particularly convincing scene, but nasty in it’s intentions, and a bit of a departure from the broad silliness we’ve already witnessed.

Later on there’s trouble in paradise, as the hoodlums and the Undertaker fight amongst themselves, with one of the lowlifes ending up reduced to a dime-store skeleton from being dunked in a vat of acid. Searching for clues, Glass and Thursday end up running out of fuel on a lonely highway, just as the two remaining villains mysteriously show up. Glass leaves to get petrol and the left-behind Thursday narrowly escapes death, the bikers riding at her with knives at the ready. In a split second one of them ends up crushed under a truck. The Undertaker flees the scene – it’s hard to believe this dorky character also dresses up in leathers and rides a motorbike – but at least Thursday survives. The net is tightening around the Undertaker, as Glass and Thursday put two and two together. Eventually they track him to his lair, but the Undertaker may still have a few tricks under his starch-pressed, embalming-fluid stained sleeve …

As I’ve gotten older, I’ve become more sensitive to violence against women, and try to avoid films where the victims are exclusively female. While men do cop it to some degree in The Undertaker And His Pals - knives and meat cleavers to the head, vats of acid and so on, it’s clear the focus is on splashing fake blood on pretty women. The chain murder in the sauna is the most extreme instance. I do wish it had been an even spread of gender with the mayhem, but I guess you can’t expect anything with this type of film. They are what they are. There’s still aspects to enjoy here. The comedy/slapstick elements are not particularly funny, but easy to appreciate in an already ridiculous premise. The end credits are my favourite part of the film, as the murdered people come back to life, and wink at us. Friday’s even eating a hamburger! The colour palette on display is as lurid as it should be, and very sixties. Check out the women’s hairstyles too … very bouffant and glamorous.

As far as acting goes, the bulk of the enthusiasm goes to Ray Dannis, who effectively smarms and snivels his way through the slimy role of the Undertaker. The others are fairly nondescript, but the screen does light up whenever Thursday and Friday take centre stage. I’m glad she was resurrected as the twin sister, once Friday was despatched. And watch for her wink right at the end … it’s up there in the pantheon of cinematic winks! So in the end, is The Undertaker And His Pals worth checking out? If you’ve had a diet of modern-ish films for a while and want to check out something genuinely quaint with a sixties bent, maybe give it a spin. At barely over an hour you haven’t lost too much of your life, if it ends up not your thing. You probably won’t lose any sleep or be giggling to yourself thinking about it afterwards, but anyone who enjoys the films of Herschell Gordon Lewis, or just lurid sixties cinema in general, should find something to enjoy from this mixed-up little film.