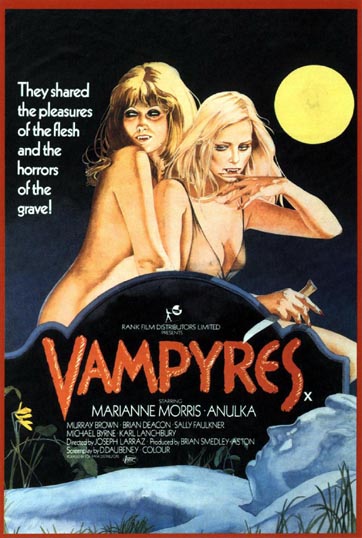 We've got Girls and Ghouls on tap this time, folks. This is the easiest Joseph Larraz movie to come by. I wish it were easier to get one's hands on more, because from reading about them they sound pretty distinctive and hard-hitting. C'est la vie, though, this one is definitely worth a view.

From the opening scenes we're confronted (or is that treated) with sex, nudity and violence. Two naked lesbian lovers, after a few seconds of cavorting, are shot to bloody death by a male assailant. It will become clearer as the film progresses what the significance of this scene is. Later, Ted (Murray Brown), picks up a female hitchhiker named Fran (Marianne Morris) and takes her home to her huge, gothic mansion. They become lovers in some pretty torrid sex scenes, and we soon discover there's another woman in the house, Fran's lesbian lover Miriam (Anulka). Of course, we're shown the female lovers in their own clinch in the shower.

It soon becomes apparent that these women crave blood, and that Ted is being systematically drained of blood via a never-healing gash on his arm. As he weakens day by day, he can't bring himself to leave. Other visitors picked up by the "vampires" are seduced and viciously killed - later to be disguised as road-accident victims and found by the police - but somehow Fran falls for Ted and wants to keep him alive.

A couple camping in the grounds (which of course makes for more sexual hi-jinks) are also killed by the vampyres, but this is the spur that makes Ted finally want to break free from his captor-lover. Can he escape and survive before he's exsanguinated completely?

Director Larraz has opened the throttle fully on this little piece. Victims are practically devoured alive, and slashed to shreds by knives by the ravenous but delectable creatures. Blood flow freely in these gruesome scenes. The sex scenes are also particularly intense and Larraz seems to genuinely know how to show a full-on passion between men and women, and women and women, to some degree. There's nothing complicated about the filming, editing or screenplay, it's just the new intensity brought to a familar creature, the vampire, that makes this worth a view. Perhaps it's worth mentioning that not many of the traditional vampire trappings figure in this film. Our heroines seem to be afraid of the sun but that's about it - there's no fangs or transformations in evidence. Perhaps Fran and Miriam are just blood-lusting ghosts.

Either way, give these hitch-hiking girls a ride sometime, if you'll pardon the expression. This is a minor classic of the vampire genre that doesn't hold back on any of the implied urges that underpin all of our fantasies. It's sex and blood all the way, folks. Enjoy, if'n you've a mind to it....