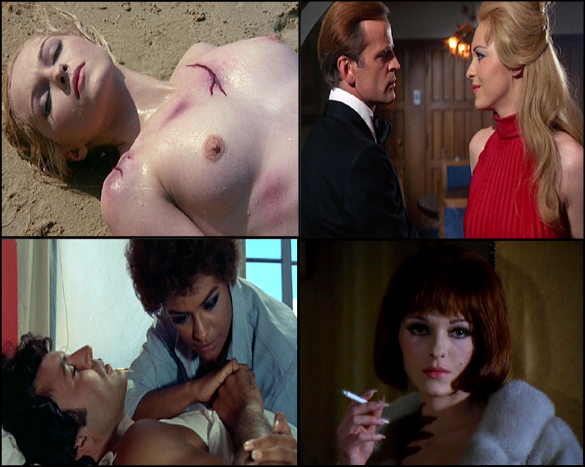 Sometimes things just come together. I'm aware that a lot of filmgoers write Jesus Franco off as a talentless, zoom-obsessed hack. I'd just ask, though, take a look at Venus in Furs. It's an instance of a director firing on all cylinders in every respect, and I'd urge any fan of cult cinema to get their hands on a copy and take a look. If any time a director's indulgences - in this case, Franco's jazz fetish - paid off in a film, this is it. No more preamble, let's dive straight into Franco's filmic whirlpool. 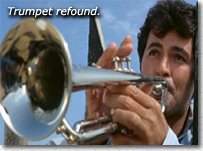 Handsome jazz trumpeter Jimmy Logan (James Darren) is in a strange mental state on an Istanbul beach. He digs up his trumpet from the wet sands, but has no idea why he buried it. Beginning to find his inner beat again, he's startled further to find a body coming in from the sea. The female corpse finally washes ashore, a beautiful blonde (Maria Rohm) who looks strangely familiar. Gazing into her face and looking at her wounds, Jimmy remembers a decadent party he attended. As he looked on, rich playboy Ahmed Kortobawi (the iconic Klaus Kinski), middle-aged pianist Percival Kapp (Dennis Price) and photographer Olga (Margaret Lee) greet the fur-draped blonde sophisicate Wanda Reed (Rohm) at the revels. Ahmed and Wanda appear to be lovers and greet each other warmly. As the two leave, Kapp and Olga exchange knowing glances and rise to leave too. They take her away to a basement and, as Jimmy looks on in horror, proceed to attack her. As the atmospheric, stroboscopic scene proceeds, Olga whips her with a vicious frenzy, Kapp molests her and Kortobawi proceeds to stab her to death with a huge knife and drink the blood. We come back to Jimmy in the present, haunted by what he remembers, and by the beautiful face of the dead girl he's just found. 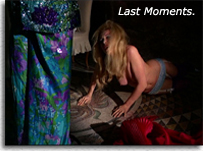 Jimmy becomes obsessed by his memories and in an effort to clear his mind, travels to the carnival festival at Rio. We are introduced, as Jimmy lives swirling in his own thoughts, to Rita (Barbara McNair) a dark-skinner singer who is Jimmy's current part-time lover. Rita's concerned for Jimmy, who seems to be going through some sort of breakdown. Jimmy assures her he'll be okay, but no sooner does he begin playing gigs again in Rio (with Franco in the background, playing slide trombone in the band) than a mysterious - and beautiful - blonde woman in a fur coat makes her appearance. Jimmy is staggered by her resemblance to the dead woman of his dreams. When she leaves, Jimmy's compelled to follow. His vision becomes blurred and shifting. In slow-motion he follows her outside into a seperate apartment and the two, with the woman now in a short blonde wig, make love. Afterwards the woman, called Wanda, admits she doesn't really know who she is, and the 'everything ended a long time ago". Later Jimmy tries to make sense of everything but comes up with nothing. Is Wanda dead? He even considers the possibility that he is dead. He returns to the upset Rita and assures her that he's back with her and that his preoccupation is under control. Well, we'll see.

We visit Percival Kapp in his rooms, quietly playing his piano. Wanda, in dark wig and fur coat, turns up mysteriously in his room. He's shocked but entranced by the vision. Wanda appears on chairs, strikes poses. Kapp tries to have sex - he's obviously got a stocking fetish - with the woman clad only in a fut coat, stockings and knickers. It soon becomes clear that the figure in the room is ethereal only, and she dissapears to return in mirrors, in the corner of his eye, all through the room - just anywhere but the bed. Suddenly, as the music reaches a crescendo, Kapp dies. It seems that the presence of this 'Venus in Furs' is lethal, without even touching him. The figure smiles and leaves. Later, at a party thrown by Paul Muller, a Franco regular, Jimmy attends as a muso, again with Franco playing along, this time on piano. Rita's come along to watch this time. In another room, Olga has turned up. She spots Wanda in a short blonde wig. She approaches the woman, who looks so much like the girl she tortured years ago. The two begin to embrace and kiss, but a drunken Muller lightly drops feathers out of a pillow on them. Jimmy enters the room and drags Wanda away, furious. He tells her if she's into women that he'll gladly step aside, but Wanda just runs away. After Rita asks Jimmy how she can entrance him just as Wanda does, Jimmy reassures Rita that he's completely through with Wanda, and that she should just be herself. 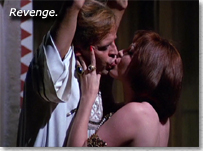 Wanda turns up at Olga's place for a photoshoot, which of course involves removing Wanda's fur coat and rendering her topless. The two women begin to make naked love when Wanda shows Olga her true wounded, sea-drenched dead face. Olga's heartbroken at the sight of what she contributed too. She confesses to the motionless Wanda that she always felt guilt after the fateful night. She then proceeds to slash her wrists in a filled bath. Trailing her fur coat behind her, the topless Wanda moves again and leaves the house. Waves crash on the shore. Wanda turns up at one of Jimmy's gigs as Rita looks on, watching her man become entranced again. This time, Wanda and Jimmy leave Rio and return to Istanbul. They seem to enter a state of bliss, and live as normal lovers for a time. Soon enough, Wanda's turning up at Kortobawi's home and has him tied up and begging for her attentions. He tells her a tale of a sheik who had everything but a servant girl who spurned his advances. He gives up his kingdom for a day and puts her in charge, if she would only love him. She turns the tables on him and makes him her slave. Wanda and Kortobawi act this out, with the end result being the man hanging dead, in ropes, killed by Wanda's deadly presence. Wanda shows him her dead face from the beach, seconds before he dies. She retrieves her furs and we see waves crashing on the shoreline again. 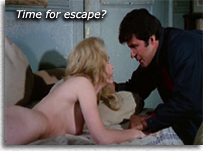 When next we see Jimmy in their Istanbul hotel, he's been approached by a detective on the case of the murders, looking for Wanda. He assures the man that Wanda had been with him last night, the night Kortobawi had been murdered. He goes upstairs ostensibly to get Wanda for the cop, but in reality the rash Jimmy makes an escape with her, tearing off in a car. After they race around for a while, Wanda suddenly jumps out at a graveyard, and dissapears. Jimmy desperately tries to find her, but again his vision becomes distorted and everything shimmers and shifts in slow-motion. Jimmy loses her completely. We see Wanda in a strange room, lying on the floor with her murderers, who seem to be alive again. Have we entered some sort of of netherworld between life and death? Later, Jimmy finds a gravestone, with a sad eulogy to Wanda on it. It does indeed seem that Wanda was dead all along, and became an avenging spirit, coming back to claim her killers. Jimmy's journery isn't over though, by a long shot. Sadly roaming that same beach where he found Wanda's corpse, another body begins to wash onto the shore. A body which will prove to cause the ultimate revelation. Jimmy runs towards it, fearing what he'll see, but unable to turn back ...

Venus in Furs has everything going for it, as a perfect Franco film. Aside from the lush visuals on display, he's infused the whole proceedings with lashing of continuous jazz. I don't know a whole lot - well, anything - about the genre but it all sounds good to me. All the actors are top notch and Maria Rohm as Wanda is an absolute delight to behold. Her sophisticated, sculpted face couldn't be carved out of stone, or painted any more beautifully than it is in real life. Her grim smile as her victims die, transmits her cold satisfaction as vengeance is claimed. I'll be tracking down other Franco films which feature her with some zeal now! Even James Darren as Jimmy is good to look at, and acquits himself well as the tortured musician, obsessed with the ghostly woman who haunts his dreams. Kinski and Price add class as Wanda's perverse male killers, and Margaret Lee conveys her initially savage, then guilty character with a nice amount of feeling. Barbara McNair's Rita, at first, seems a blank, secondary figure but then we start to realise we are often watching the proceedings through her eyes. She offers the humanity that the other characters have lost. Trying to bring Jimmy back from the brink, we see the man's normal feelings as well as his possessed state.

Visually, Franco's images are complex and intriguing. Supernatural mental states are passed into, and out of. The images slow down, dissolve and overlap. The beach, site of death and the discardment of life, and the ever-present waves, come and go throughout our story. Costumes, sixties fashion, musical instruments and objects, plus the physical locations all delight. Franco obviously loves Istanbul, having used it in quite a few of his films, and knows how to shoot it at it's best. Rio's carnival atmosphere comes and goes through the middle third of the film, and adds colour to an already colour-drenched piece. If you're looking for intense erotica or horror in a film, you probably won't find a huge amount to satisfy your needs in Venus in Furs. It's really more of a effective mood piece. That's not to say that a semi-naked Rohm in furs and stockings isn't compelling to look at, but a fetish for both would probably help. The kills are all done through some sort of death-bringing psychic energy emitted by Wanda, so there's zero levels of violence and gore. If you like Franco's psychedelic efforts this would have be a prime example of them. The next time you get a bad run of Franco films and start to look negatively at his oeuvre, pop in Venus for a spin in your DVD player, and I think you'll come back to him.

This one's a pure work of art, and if you haven't seen it, I'd urge any regular reader of these pages to give it a view as soon as possible!


P.S. As an extra service from your cheerful Girls, Guns and Ghouls team, if you've got Rita's glorious Venus in Furs song caught in your mind, here are the actual lyrics, courtesy of the 'net, so at least you can sing it to yourself with all it's verses:

For those who showed no mercy then, no mercy will be shown
for those who got their pleasure from the strangled cries and groans
The grins that filled their easen faces will be wiped for sure
Sometime someone somewhere will come knocking, knocking at your door

Venus in furs will be smiling when that moment arrives ... (times two)