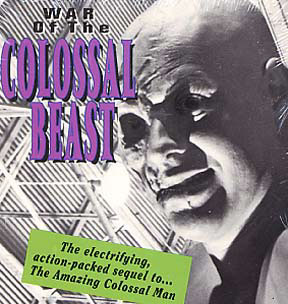 Well, viewers, the war of the colossal beast is upon us. Well, I wouldn't call it a war, more of a tussle, really.

Bert I. Gordon has a bit of a reputation among film fans as a schlockmeister, with works such as "Food of the Gods" under his belt to attest to that. But this film, dinky special effects aside, really isn't a bad piece of film-making.

It's a sequel, in fact, to "The amazing colossal man" made a year earlier by the same man. Apparently the mad, radiation-induced giant from the first film has survived the army strike against him, and is scavenging around in Mexico, looking for food trucks to raid and Mexicans to terrify. He hasn't emerged unscarred though - the quite effective makeup on the bald actor reveals an exposed - and eyeless - eye socket and the top part of his jaw. His shoulder has also been burned from probable incendiary fire. The colossal beast's appearance is the highlight of the film, in my opinion.

The colossal beast's sister is on his trail, hoping to stir some vague remnant of humanity within, but all he can do as she pleads with him, strapped as he is on the ground in an abandoned air hangar in Los Angeles, is grunt and growl. He eventually escapes his bonds after a lengthy flashback to show the origin of the giant and confused by searchlights, he holds the army at bay by lifting a bus full of children, gesturing to throw it at them. But his dutiful sister is at his side, pleading for him to try to be human. Finally, her words penetrate the brain-damaged fog and he comes to his senses. Placing the bus back down, he utters one word - his sister's name, Joyce - and electrocutes himself on some high voltage wires. This final scene is the only coloured scene in the whole black and white film, a strange idea but quite striking, nonetheless.

The acting is what you'd expect for the era, earnest while delivering some fairly questionable lines (like "We can't leave him exposed to the weather, even if he is a giant...") but we're not talking Ed Wood levels of tripping over the sets in wooden indian mode. I wanted to know what was going to happen to our befuddled cyclops, and felt some sadness that his only moment of lucidity he experienced made him want to off himself on "old sparky." The special effects were pretty ordinary, the usual superimposed (badly) giant creatures we've come to expect from Monsuier Gordon.

Still, if it's ever on cable or you see it in the two dollar a week shelves at the local vid store, I'd say give it a look, if for nothing else but a reasonably rare sequel (I'm sure they didn't make that many sci-fi sequels those days) that has some pretty nifty makeup, if you're into the makeup side of things. The actor's growling skills also made me flinch a couple of times - he relishes a guttural howl or two! Worth a peep, just don't hang out for a war, 'cause there ain't one...