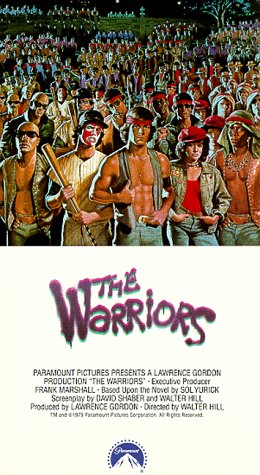 You'll remember this line when you hear it, rest assured.

It's a kind of fairy tale, really. Assembling in the Bronx, all the street gangs of New York have called a truce under the directive of Cyrus (Walter Hill), leader of the Gramercy Riffs, one of tne of the more powerful gangs. Cyrus wants to unite all gangs and form an unstoppable army and take over the city. The gangs are enthusiastic, but before anything more can happen, Cyrus is shot dead by the insane Luther (David Patrick Kelly) leader of the Rogues.

Blaming mixed-race "Warriors" who hail from Coney Island, somehow the frenzied crowd seem to believe the deception, and the nine Warrior representatives have to make it back home with hordes of gangs out for revenge. The truce is over. Their leader dead, Swan (Michael Beck) and his seven friends have to battle all manner of - sometimes ridiculous - costumed gangs who want blood. First up are the "Turnball AC's", basically skinheads. There's also gangs like "the Baseball Furies" - costumed Kiss look-alikes who carry baseball bats, "the Lizzies" - Lezbo gang members, and also a gang who look like overalled farmers. All this gang activity is coordinated by the new leader of the Riffs and a cool woman DJ over a gang-run FM radio station.

There also a bit of budding romance with a tough-talking chick played by Deborah Van Valkenburgh, but the whole film is really about the flight of the remaining Warriors, fighting it out with the various gangs, making it to the subway and finally back to Coney Island, where the Rogues have tracked them. There, in their clapped-out van, they beckon the Warriors out for a final battle, Luther chinking bottles on his fingers as he shrieks for the Warriors to come out and play. It's a memorable scene, folks. The Riffs have arrived as well, determined to have their vengeance. Will the truth be revealed, and the Warriors be allowed to escape?

There's isn't much to take seriously here, as controversial as the film was on it's release. Apparently waves of violence wracked theatres and riots ensued. Geez. The gang violence is few and far between (although always threatening) and when it does occur, is barely anything you haven't seen before on TV a hundred times. When gang members are pummelled, they get straight back up with barely a bruise. None of the threatening chains and various other weapons ever seem to get used, there seems to be no bystanders to ever get hurt, and barely any cops. It's an empty city in perpetual darkness. But hey, it's a polished film and looks good beyond it's years. The soundtrack has a good electronic mood running through it. Performances are pretty much by-the-numbers, functional at best, hysterical at worst. Nonetheless, it's all compelling and at ninety-three minutes running time, there isn't much time to be bored.

An interesting time capsule, very tame these days but no less entertaining for that. Enjoy.