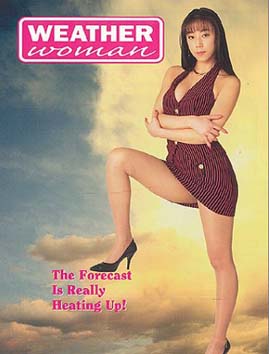 This is a kinky little gem of a Japanese film. Not for the easily offended, mind you, as it offers a light take on all sorts of weirdo fetishes, as well as being a hugely entertaining fantasy/action piece. It really does have a "bit of everything" for the discerning viewer, and is actually one of my favorite films. Shall I try to justify the praise?

Keiko Nadakei (Kei Mizutani), as we see in the opening scene, is an amazing female creature. She can fly, do back-flips, and God knows what else. But she wants be a Weather-Woman on a Japanese news program, and will stop at nothing to achieve her goals. So, to oust the previous incumbent who is on sick leave, Keiko reads the weather and flashes her panties. She's in!

Keiko becomes a national celebrity, urged on by the elderly Chairman of the network, who loves her antics. She becomes power-hungry, demanding an executive suite (which she gets) and an entrance hall lined with semi-naked men, with roses clenched between their teeth, as she flips in her characteristic way into her dwelling. Her predecessor is forced to work in a low-grade documentary show called "Hello Mister Pervert!" and interview strange men who are into fun activities like enemas. Lovely! These scenes are all played for slapstick, though.

As you may expect, the Weather Woman's bubble is about to burst. The Chairman's daughter, Kaori Shimamori (Yasuyo Shiroshima), who had been living in Paris (as she keeps telling us) has returned to take over the Network and get rid of the "filth". She installs the previous Weather Presenter as Keiko's slave/maid, who then is filmed in a bubbly, sudsy lesbian clinch with Keiko. Kaori then inserts this footage into Keiko's Weather program and scandal erupts. Keiko is booted out, much to the chairman's grief. Kaori takes over with her own Parisian Weather segment, which is strange and operatic to say the least.

Keiko is about to fight back, though. She is joined in a forest by a nerdish would-be suitor, Kiyoshi who, commanded by Keiko, brings her in touch with "the Heavens" by whipping her, bound in a rope-bondage situation, with a sacred object called "the Heavenly Whip". This film is getting delerious, I tells you! After some sort of heavenly lightning hits her, Keiko is powered up for the final confrontation with Kaori.

Kaori is about to put on a big show, with razzle-dazzle music and dancing numbers. It starts, with Kaori again claiming to be the one and only Weather Woman, in song. Keiko turns up though, clad in pink PVC, angel's wings and a blonde wig. Oh, and that Heavenly Whip again. She is quite a sight, I can tell you. As judges observe, making ridiculous comments about the "annals of Japanese weather history", Keiko and Kaoro (who now has a dark fighting costume on and is armed with "The Heavenly Sword" - who knows where it comes from?) are transported back to a forest and do battle with the forces of weather. They hurl blasts of leaf-strewn wind at each other, torrents of water and clash with their respective weapons. Who will win the clash of the Weather Titans?

This is all twisted Japanese comedy, pure and simple. There are smatterings of nudity but nothing really explicit in the sex-scenes department, just a bit of lesbian shenanigans. The fetishes are all treated with humour, really, as long as you're an adult there's nothing to offend. Just enjoy the bizarre situations, and incredible visual imagination that director Tomoaki Hosoyama has infused the whole production with. If you're into musicals, maybe you should take a look. There's actually two catchy theme songs to get stuck on your brain with this one!