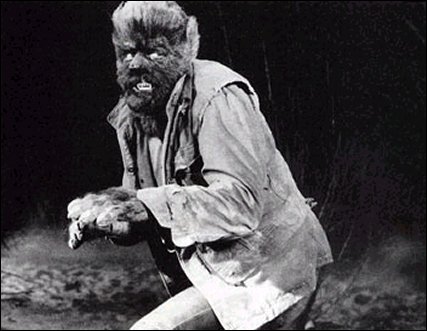 Now this movie has it all. You want a biker movie? Come to Werewolves on Wheels. You want Devil-Worshippers? Come again. Naked biker-mommas dancing with snakes and skulls? Here we go. Savage werewolves who can ride choppers? This is your movie. I could go on, but let's get straight into explanations. This is the third review in my biker series. I don't know where or when this section is going to end as these films are proving endlessly entertaining! This one is probably my favorite so far, being the old horror nut that I am. It's a nice mix. I'll give you some plot.

The aptly named Devil's Advocates are an outlaw biker gang prowling the highways. They do what any other biker gang does, well, in the movies, at least. Take drugs, hump their "old ladies" and terrorise the redneck locals. A couple of the aforementioned rednecks run one of the gang off the road in their pickup. Bad mistake. Stopping at a gas station, the Advocates catch up with them and one of them is beaten to a pulp, after being given a big sloppy kiss by Adam (Stephen Oliver), the gang's leader. This is the standard biker-movie section of the film. Things are going to change, though.

In their travels, the Advocates encounter a group of Devil-Worshipping monks, who after the bikers had invaded their grounds, give them drugged wine and bread. After the bikers wander off, the leader of the Satanists, "One" (Severn Darden) casts a spell by stealing one of Adam's old lady, Helen's (D.J. Anderson) hairs. One's chanting is pretty funny, I've gotta admit. It sounds like he's going to break into "I will survive" or some such torch-song any minute. After he kills a cat for it's blood, One creates a voodoo doll with Helen's hair. Soon enough, Helen is lured away from the camping bikers and is doing a nude dance for the Satanic monks, complete with snake and skull. Yes, it's a highlight of the film.

Adam and the bikers realise Helen's missing, and go and beat up the Satanists. In the melee - the monks go down very easy, mind you - the bikers are smeared with blood but Helen is rescued. Soon trouble is brewing amongst the outlaws, Futher in their travels, two of their number are savaged and killed by unseen monsters. Thinking they're killed by animals, the bikers bury them and, in a fitting biker ceremony, throw their beercans into the graves. Then another biker is killed and thrown into the giant fire the Advocates had made from some old cars. After warnings from Tarot (Deuce Berry) a mystic member of the gang, they start to return back to the Devil-Worshipper's monastery. In their travels, Tarot is booted out by Adam for being too obsessed with the mumbo-jumbo.

Stopping for the night, the bikers seem to fall into hypnotic trance around the fire and do a weird dance around it. Finally two of the group transform and we meet our two werewolves - Adam and Helen! It's pretty good werewolf-makeup, I'd call them the old-school type of werewolf. Not giant humanoids with wolf-heads like The Howling, or humanoids wolves like American Werewolf in London. These are people covered in fur, with fangs and claws. The "Lon Chaney" style of Werewolf from the Universal classics. But Hell, they're mean and they mean business. They want blood! A couple of the bikers are killed before the Helen-Werewolf is burned to death. Retaining some intelligence (I guess) the Adam-Werewolf jumps on a chopper for a few minutes before he too, is burned to death in an explosion.

Tarot leads the bikers back to the Satanists for revenge. Or is it to meet their fate? As soon as they begin to attack the monks, they are frozen by their chanting. One claims that they are all "one". We see an image of Helen as a crucified Bride of Satan yet again. We'd seen this image a few times in the film. So what's going on? Are the Devil's Advocates now Devil-Worshipping bikers? I'm a bit confused. They all seem to ride off onto the highway again, none the worse for wear. The ending is somewhat puzzling, but I'm sure it makes sense to someone.

This film has a lot to offer fans of biker, horror and exploitation. The bikers greasily look the part, the monsters, though briefly seen, are well done, and even quite frightening in their own ferocious way. The acting's pretty good for what it is, the music is excellent - lots of twanging, slow guitars and there are some fantastic camera shots of the bikes, birds in the sky and of course, lots of shots of devilish fire. Somehow the mixture of outlaw bikers and Devil-Worshippers works. If you're a rabid fan of Werewolves you'll be disappointed as they're a small part of the film. One does ride a chopper though, and you can always console yourself with the nude D.J. Anderson's jiggling devil-dance. It goes on for a looong time!