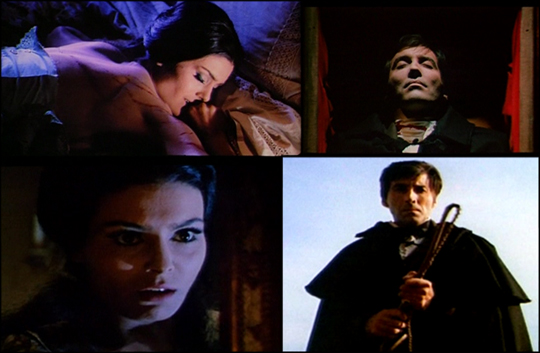 Also known as:
Corps et le fouet, Le (France)
Frusta e il corpo, Le
Night Is the Phantom (UK) (dubbed version)
Son of Satan
The Body and the Whip
The Way and the Body
What (USA)

Hearing a title like The Whip and the Body, and not seeing the actual film, you could be forgiven for thinking this was all about S & M. This gothic classic by director Mario Bava does contain elements of sadism and masochism, but really is much more of a complete cinematic experience than just an assembled bunch of whipping scenes. It's one of the most lushly photographed, staged and lit films I've ever seen, and an obvious influence on the works of Dario Argento in his Suspiria phase. Couple the technical achievements with a compelling story, the presence of horror icon Christopher Lee and you've got a masterpiece on your hands.

Outcast son and brother Kurt Menliff (Lee) returns after some years of exile to his beachside family castle, somewhere in eighteen-hundreds Europe. There's hardly a warm welcome in store. His ailing father Count Menliff (Gustavo De Nardo) wants him to leave, his brother Christian (Tony Kendall) wants nothing to do with him and Christian's wife Nevenka (Daliah Lavi) appears appalled that Kurt has returned. In addition, one of the servants, Giorgia (Harriet Medin) swears eternal hatred on him, as he seduced and abandoned her daughter Tania, who later killed herself with a dagger Giorgia keeps in a jar along with a rose.

Still, despite all this vehemence directed toward him, Kurt is adamant he is staying in the castle, and wants his position returned to him in the family. The Count is weak, emotionally and physically, and allows him to stay. Later, Kurt meets Nevenka on the beach and they exchange a few pleasantries. Suddenly, Nevenka hits Kurt across the face with a riding crop. Kurt knocks her down and begins whipping the girl in a frenzy. He exclaims that she 'always liked violence' and has 'never changed'. She looks up in her dazed state, expressing pleasure and pain, and the two make love.

Kurt returns to the castle alone at night. The others search for Nevenka in a panic, but Kurt seems disinterested. He wanders the castle alone, hearing strange, ghostly female voices. Confused, he peers around, and suddenly is stabbed in the neck, seemingly by an invisible assailant from behind a curtain. Kurt bleeds to death just as the rest of the Menliffs find Nevenka outside in an unconscious state, with welts all over her back. They then discover Kurt's death and though understandably shocked, no-one mourns his passing. In fact Giorgia thanks God for his murder ...

Kurt is buried and sealed in a tomb. Some of the family truths begin to emerge. That Nevenka was actually promised to Kurt before he was banished. That Christian, though never actually loving Nevenka, was the dutiful son, doing his father's bidding by marrying her. Christian in fact, loves Katia (Ida Galli) a servant girl in the castle who was sympathetic to Giorgia's hatred and loves Christian in return. Nevenka begins to experience fears about Kurt's return from death. She hears whipping sounds in the night, which turn about to be a tree hitting a window in the wind. This is a superbly realised scene, building fear for us viewers as well, as Nevenka paces the castle looking for the sounds, becoming more and more fraught with each passing second. She sees muddy footprints which terrify her, and finally Kurt's spectre fully appears, alternating in a greenish vision and normal skin colour. He whips her again, with Nevenka looking both passionate and in agony. The ghost promises revenge on those who wronged him, and so part one of our films ends ...

As part two commences, Count Menliff is murdered by the same dagger that killed Kurt. The family, now in disarray, looks for a perpetrator. Nevenka claims Kurt is back from the dead, but nobody believes her. Nevenka dissapears again and although Christian and Katia profess their love for each other, Christian looks for Nevenka. As he too hears ghoulish laughter and sees the muddy footprints that Nevenka claimed to exist, he tracks her back to Kurt's tomb. Retrieving the unconscious woman, Kurt decides, with the help of limping servant Losat (Luciano Pigozzi) to burn Kurt's mouldering corpse, and end the evil he now believes lives beyond the grave. As the skeleton burns to ashes, Nevenka encounters Kurt's spirit again. Kurt wants to be with her forever, and they tell each other they love each other, even though Nevenka has stated emphatically to Christian many times that she hated Kurt. Nevenka decides to finish Kurt off once and for all, with the same dagger that killed him the first time. Christian arrives to late to see Nevenka talking to thin air - before stabbing herself with the fatal dagger.

As mentioned earlier, The Whip and the Body is a lush visual experience. Shades of blue, green and red are all used with the lighting of fantastic gothic sets. Darkness and shadow are used to maximum, intentional effect. Bava excels at such technical work, but he's also coaxed wonderful performances out of his actors. Lee acquits himself well as Kurt Menliff, although I would have liked to hear his actual voice rather than a dubbed actor in the english version. He does convey passion for Nevenka as well as just cold sadism, and is actually quite handsome in this role. The film really is all about Nevenka - her betrayal by the Menliff family, leaving her first in the arms of a - admittedly passionate - sadist, and then with a man who doesn't really care about her. At least she can find a sort of fulfillment with Kurt, but then loses him to a murder she may have committed herself. Because we are never sure whether Kurt's return is in Nevenka's mind or not - she may be leaving the footprints in her maddened state and imitating Kurt's laugh. The last scenes imply that Kurt's spectre is just an illusion in Nevenka's mind but we'll never really be sure. Daliah Lavi's performance as Nevenka is outstanding, as we are constantly off-balance with her. Is she victim or sympathetic, deluded perpetrator? Does she enjoy the whippings she receives from her sadistic lover or not? There is a delicious ambiguity to it all. The brunette Lavi brings a Soledad Miranda-like tragedy to the role. The rest of the cast is servicable for such a film but it's these two leads who carry it high.

Just sit back, and let the gothic, perverse atmosphere wash over you. There may not be any nudity or outright blood, but there's enough savage sensuality of a subtle kind to tide you over. The dark visual feast that Bava's composed is amazing to behold, but even if that didn't exist, the central mystery is compelling, and leaves you with a lot to think about once the film is over.