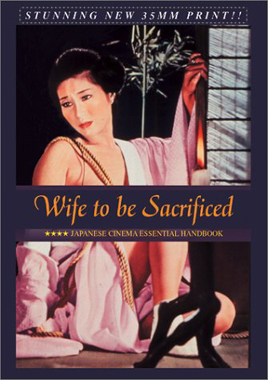 After reading the fantastic book on extreme Japanese film Eros in Hell, this is one of the first Nikkatsu productions I've seen that was mentioned in it's captivating pages. Wife to be Sacrificed features the gorgeous Naomi Tani, who is supposed to be the ultimate and most revered S & M actress in Japan. She certainly has charisma in this one. The film is worth a view on many levels, not just the sexual one. Whether intentional or not, Director Masaru Konuma has fashioned something of a comment on the human condition. Let's take a look at some storylines, to see if I can bear this comment out.

Akiko (Tani) has been divorced from her husband Kunisada (Nagatoshi Sakamoto) for a while. The police approach her for information on him, as he is a suspect in a paedophilia case. There is a little girl who calls him "Uncle" whom he abandons early in the film. Akiko runs into Kunisada, who abducts her and takes her away to his secluded house in a forest. There, he binds her and watches her go to the toilet. And I do mean properly go to the toilet. You only see a glimpse but there's no doubt about what's going on! Akiko slashes him and tries to escape, which only results in her torture with melted candle wax, after she's been tied up naked. Tani perfectly conveys the pain of this scene - who knows if it was done for real , to her at least?

Akiko tries to escape again, only to be raped by two hunters in the forest. Kunisada finds her unconscious, bathes her and after tethering her up and shaving her nether-regions, "marries" her again, to which she finally shows a glimmer of response to his forced advances. Afterwards, Kunisada finds a comatose couple in the woods, who had tried to commit suicide. Bringing them back to his house, after molesting the once-thought dead Kaori (Terumi Azuma), he proceeds to torture the revived girl with an enema while Akiko is willed to have sex with the now-revived boyfriend Kiyoshi (Hidetoshi Kageyama). This is an intense scene, as we finally realise that Akiko has crossed over to the side of Kunisada, and actually enjoys these activities.

Their relationship now in full flight, Akiko begs Kunisada to whip her in the forest. He, of course, complies and their perversity is complete. But there is still the matter of the abducted couple, who once longed for death, the little girl who has trailed her "Uncle" back to the woodlands home, and the police on their trail. How can it all end up in this maelstrom of carnal madness?

This film, of course, is not one for any feminist viewers. But in a way, Akiko turns the tables on her captor and becomes more powerful than he. I'd better not divulge the ending, but it appears in many ways that Akiko is the stronger character and that Kunisada is weaker by far and flees his true feelings. In many ways this is a very serious, feeling art film that covers a lot of the complexity of human emotions. I have described in the plot summary some outrageous sexual behaviour - but these scenes are generally filmed very subtlely and as with most Japanese films, the genital areas are always obscured by objects or positions. So even though the sexual content is high, I feel this is more a film to think about than get turned on, or off, by. It's beautifully filmed with a simple but effective score. The acting is all of an extremely high calibre. Naomi Tani conveys many emotions with her classically beautiful face, we are certainly operating at a level beyond a cheap exploitation-sex film. This is not to say the film does not have exploitative elements, though. You've got hinted-at paedophilia, necrophilia, rape, coprophila, sadism and masochism and more. None of it particularly explicit but, this ain't The Sound of Music, folks!

Everything considered, I would recommend this film for those of you who are interested in Japanese cinema, or international cinema in a general sense. Running at a little over an hour, there really is no time to be bored, at the very least. It's not the usual trashy cinema experience that I love, but Wife to be Sacrificed is something a bit deeper, and just as satisfying. Importantly, it still entertains while you ponder these characters and their sad, compelling, sordid worlds.