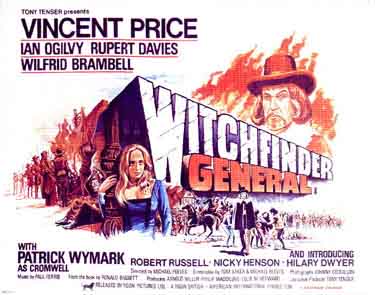 Michael Reeves only made several semi-horror films before his suicide, but he has generated a loyal following because of a relentlessly depressing vision of humankind, which was seemingly unhampered by studio interference. Witchfinder General is his best known work, the only one I've seen, but once viewed it's certainly hard to forget.

This is a film of motion and brutality. The first scene we witness is a screaming woman being dragged to the gallows, while a priest mutters the usual mumbled latin, and hanged as a witch. Vincent Price as the grizzled Hopkins looks balefully on, with his assistant Stearne. The deaths barely let up from this first execution, and they are rarely this quick and merciful.

Hopkins and his brutal assistant, who can barely stand each other, make profit in 1645 England as war rages between the Royalist Army and Oliver Cromwell's Roundheads. He is a lawyer who tortures confessions from suspected witches, then executes them for the glory of God and money. Often it's a jealous villager who sets up the hapless "witch" for the torture, just for personal spite. Hopkins turns up in a particular village where a priest has been denounced as a witch. The priest, John Lowes has a niece, Sara, who is the lover of the absent Richard Marshall, soldier in the Roundhead army.

When Lowes is tortured horrifically by Stearnes - needles are forced into his back to find the marks of Satan, and he's "set to running" until exhausted, but is briefly thrown in prison after some implorings from Sara. Sara offers herself to Hopkins and buys some time for her uncle. Sure enough though, Stearnes rapes Sara while Hopkins is in another village, and as a consequence of her "spoiling", Hopkins loses interest in both Lowes and Sara and the priest is hung as a witch, along with a couple of other unfortunates.

When Marshall returns from the fighting, he finds Sara in a distressed state and Lowe dead. He vows to avenge Sara and kill Hopkins. So the obsessive hunt begins. As more "witches" are tortured for money and executed - Hopkins, in a new village, decides to start burning them alive - Marshall sends Sara to hide in a particular village but Hopkins and Stearne turn up, and lure him into a trap. There, Sara is tortured so that Marshall confesses and can be executed with impunity.

But he won't confess. Marshall has become insane with the obsession to kill Hopkins and will not spare Sara. He only repeats, he will kill Hopkins. At that point, soldiers interrupt the proceedings and allow Marshall to grieviously injure Stearnes - stabbing him in the eye - and take an axe to the "Witchfinder". A soldier shoots the bloody Hopkins out of his misery, as Sara screams uncontrollably, and Marshall shrieks in rage that his enemy has been taken from him. Evil has corrupted all.

As said before, the imagery and emotion of this film certainly linger on the mind ... the overwhelming cruelty and brutality never lets up. It ain't Hollywood, folks - when people are hit or stabbed, they scream in realistic pain. Come to think of it, there's a lot of screaming in this one. Performances are all uniformly excellent, with Price, as reviewers often note, being particularly restrained from his usual hamminess. There's no lightness, no humour, no letup. This one led to further witch-torture films along the lines of "Mark of the devil" and its sequel, but this one is consistently a genuine work of art, as opposed to exploitation fare - which isn't necessarily a bad thing, by the way!

I suppose to quantify this film you'd call it a horrific historical piece. Deadly serious, don't come to it with a six-pack and some rowdy friends - you won't be too popular afterwards. Check it out as an interesting contribution to the history of extreme film. The history isn't pure but the malevolence and suffering throughout is. I won't say have fun, this time ... but worth a look nonetheless.