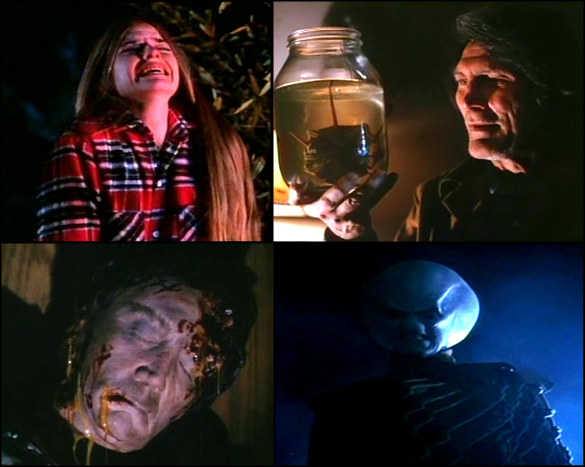 Also known as:
It Came Without Warning

I haven't had as much fun watching a film in ages. Greydon Clark's Without Warning came and went quietly back in 1980. It's a pity as it has a lot going for it, fully deserving of a full DVD release these days. You've got the central premise of an alien hunting humans which pre-dates Predator - so glad I could type that - a nice slasher plot design with some effective gore, some gorgeous cinematography and a stellar cast featuring Martin Landau, Jack Palance, Cameron Mitchell, Neville Brand and even a young David Caruso, for God's sake! Let's see this film remastered and out there, as soon as possible. Enough hyperbole, let's get on with the film and take a look at our evil, alien frisbee-throwing friend. 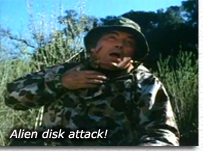 We start our adventure in the countryside. Dean Cundey's expert camerawork captures the beauty of the wilderness well. We meet a camouflaged hunter (Cameron Mitchell, fresh from The Toolbox Murders) and his son (Darby Hinton) trying to have a 'shooting' holiday. It's not going well though. The macho dad is frustrated with his son's lack of interest in killing things. The son wants none of it. We get the impression that the dad wouldn't mind putting a bullet into his nancy-boy offspring. Before he can think further on that unsavoury thought, strange, hairy organic frisbees fly out of the trees and attach themselves to him, extending tentacles into him and sucking his life-fluids. He dies in front of his son, who tries to shoot at the thing which threw them - we only see a shadow - but more frisbees hit the young man, and he dies too. 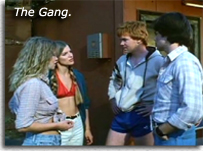 Later, College co-eds Tom (David Caruso, instantly recognisable), Beth (Lynn Theele), Greg (Christopher S. Nelson) and Sandy (Tarah Nutter) are on a camping trip in the same forest, so we know there's going to be trouble. Tom and Beth are already a couple but Greg and Sandy are just friends, although Tom is trying to push the two together. They stop in their campervan at a creepy gas station, apparently owned by someone called Taylor, who's not around. Now, this Taylor fellow is obviously a hunter as there's animal's heads on walls everywhere, of which Beth and Sandy do not approve. Sandy runs into a strange, dishevelled man, Fred 'Sarge' Dobbs (Martin Landau), who mutters odd things, but poses no immediate threat. The gang get some fuel and look for someone to pay, and eventually the grizzled Taylor himself (Jack Palance) shows up. He accepts their payment and after some negative comments from the girls about the animals, claims he eats everything he kills. Disconcerted, the four leave for their camping ground. 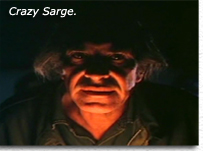 Back in the forest, a Scoutmaster leading a group of scouts on a bush-walk, gets the 'alien disk treatment' and the scouts flee in terror. Ignorant of this going on, the foursome frolic in the lake. Beth and Tom begins to canoodle, so Greg and Sandy, uncomfortable and wanting to give them some space, leave for a walk. After some hours they return, but Beth and Tom are nowhere to be found. They search the grounds but to no avail. Eventually they find a water shed in the area and look inside - to their horror finding the oozing, rotting corpses of the hunter and his son, the scoutmaster, and also Beth and Tom! They flee in terror, driving the campervan into town, as one of the alien frisbees attaches itself to the windscreen. We see it's underside laden with chomping teeth and suckers, the animatronics for this little critter are quite effective and ick-worthy. They manage to windscreen-wipe it off as they hit town. Greg leave Sandy in the campervan and goes into a bar where he meets Sarge again, Leo (Neville Brand from Tobe Hooper's Eaten Alive) and Aggie the barmaid (Sue Ane Langdon) among others. They're a welcoming lot, hardly the typical insular hick-town cliche, where everything goes quiet when a stranger enters the bar. Still, it's hard for them to believe Greg's panicky story about his dead friends. Sarge tends to believe him, showing Greg his gun. The situation changes when Taylor enters the bar with Sandy in his arms, who had run from the van in panic when she saw an ominous shadow. Of course, Sandy verifies the story and the mood gets nervous when something cuts the power. Aggie lights some lamps but when the sheriff finally turns up, Sarge shoots the half-visible man stumbling out of the fog, thinking he was the 'alien'. The ambulance eventually shows up and takes the injured man away, and Leo disarms Sarge. With the police out of the picture for the time being, Taylor offers to take a look at the water shed and it's grisly occupants, with Greg and Sandy. Before they leave he finds an alien disk attached to a wall. He takes a hunting knife, slicing the creature messily so it loses it's grip. He places it in a jar of water at his house before they leave, adding another trophy to his collection. 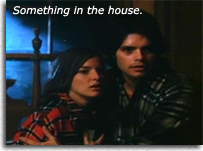 On route to the corpses, Taylor shows them the disk-scars on his leg. It seems he's been hunted before and survived - but hasn't made a big story of it and he though no-one would believe him. Entering the shed, he recoils in horror at the gruesome find. Suddenly an alien disk - they don't seem to be hairy anymore - hits him. Taylor yells at the young pair to run, and they don't need much convincing. After they're out of sight, he manages to slice the attacking disk and save his own life, yet again, and staggers off. Greg and Sandy flag down the police-car they see coming down the road - and it turns out Sarge has gone off the deep end completely and stolen it! He's so far gone he believes Sandy and Greg are aliens in disguise, and somehow he's wielding a gun again. To save their own skins they go along with the delusion, stalling the befuddled man before giving him a left hook and making their escape. To complete their getaway, they jump off a bridge and into a river. See, this film has action aplenty! They find an abandoned house and seek shelter in it's rustic homeliness. Greg offers to keep guard while Sandy sleeps, which she readily agrees to. We see forboding shadows moving through the house, and the couple begin to feel they're not alone. Later, Sandy wakes up and checks on Greg, finding to her horror he's been alien-disked! As a lamp swings overhead, casting frightening Psycho-style shadows, we not only see the seated, bloody corpse of Greg, but the alien doing the hunting! A tall, pale humanoid with a giant round head, it hisses at Sandy as she flees the house. 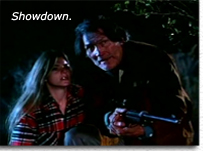 Sandy hides in a nearby shack which becomes under siege by the alien. It begins to rip planks off and break in, but Taylor comes to the rescue, and shoots Sandy a way out. The grizzled hunter has a plan, you see. Although the alien has been hunting Taylor, it doesn't realise that hunt-crazy Taylor is hunting it, too. They go back to the water shed, where it's stored it's trophies. Taylor explains that he's rigged it with dynamite. Once the alien, which will always return to its kills gets close enough, all they have to do is press the plunger. Then it's bye-bye alien. Taylor helps Sandy aim the rifle as well, as a back-up. No sooner do they spot the creature returning, then Sarge turns up again, threatening them both. The crazed man soon spots the real alien though, and moves towards it. Of course, he spends more time ranting and raving than attacking, and is promptly alien-disked to death by the giant monster. Taylor fires a shot into the creature's arm, but it squirts out some kind of goo, and repairs it instantly. It then flings a couple of disks at him. While desperately trying to cut them off with his knife, he realises his time is up. Taylor tells Sandy he'll lure the creature towards the cabin, but she has to press the plunger. With a battle cry of '"ALIEEN!!" Taylor rushes at the thing, and the crying Sandy tries to set off the explosives. Some wiring is loose though, and nothing happens. Can she repair it in time, and blow the monstrosity to kingdom come, or will a horrible fate await her as well? 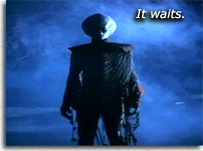 This modest little film is enjoyable, on so many fronts. Utilising the slasher formula - camping, sexual behaviour, point-of-view of the unseen killer, final girl, crazy support characters - in a fresh way, director Greydon Clark's come up with a winner here. The killer frisbees are appropriately nasty, oozing pus when cut, sucking and throbbing on their victims when attacking. We don't see the main alien until the last section of the film, but the film gains because of that. As a shadowy presence he gains mystery, and we want to see exactly what this alien human-hunter looks like. Even then he's only seen in shadow and fog, but his final appearance doesn't dissapoint. It's no Ridley Scott Alien, but an old-fashioned 1950's creature you might see in comics, gone bad. I think it works. As I mentioned before, Cundey's camerawork adds to the film, exploring the countryside in deep focus in daylight, creeping through blue-ish shadows and fog at night. The effects makeup by Jack Buehler and Greg Cannom are nice and oozing, the corpses in the shed seem to be in a stage of melting disintegration because of their 'disking'. The young cast are adequate, with Tarah Nutter as Sandy starting off plain, but seemingly becoming more beautiful and radiant as the film progresses. Maybe it's because she finally lets that long hair down to nice effect. Perhaps though, it's with the older cast that Without Warning comes into it's own. Stalwarts Landau and Palance never fail to impress, and the cameos by Neville Brand and Cameron Mitchell are good to see as well. It's rare you get an ensemble cast quite like this one. I particularly enjoyed Palance's hardened Taylor, who refuses to let the alien killer get the better of him, and fights it out until the bitter end.

I hope this film has its day in the future. It's an underrated little sci-fi horror that's worth the effort to get a hold of, even just in VHS format, until that long-awaited DVD release. There's just something unforgettable about that "flying alien disk" movie!