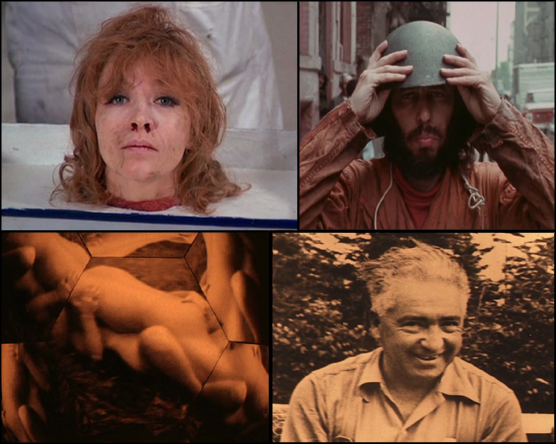 When I was a younger man and hadn’t yet worked out how to interact with women, I drew a picture of a snarling, feral monster, a reptilian creature restrained by chains that I called “The Id”. At the time, I thought it was all the suppressed anger and rage caused by my daily life boiling up into a picture, hulk-style. With the wisdom of middle age, I can see it was sexual frustration writ large on the page. Sexual frustration is the central theme of this work, and there’s probably no better exploration of this topic on film than W. R. : Mysteries of the Organism.

This West-German / Yugoslavian production is a wonderful and strange piece of cinematic art, exploring sex and the value of communism through a collage of scenes, rather than a straightforward narrative. Is a documentary? A straightforward story? A series of vignettes? None of the above really, but when the running time is over, you’re left with a single impression that sexual repression is not a good thing for humanity! Serbian director Dusan Makavejev has taken the life and work of Austrian-American psychoanalyst Wilhelm Reich as a starting point, but anyone who wishes to see a documentary on Reich will be sorely disappointed.

So what exactly has Makavejev provided us with? The first part of the film is mainly footage about Reich’s time in America where he was persecuted for his beliefs in Orgone energy, the cosmic life force given off when lovers orgasm but is basically present all around us – a bit like “The Force” of Star Wars? Even then, this is intercut with a street performance by Tuli Kupferberg of experimental seventies band, the Fugs. Tuli dresses up as a soldier and masturbates his rifle, along with a voiceover of a poem about slavery. “He who chooses his slavery, is he still a slave?” Indeed. Reich is persecuted in America for his odd beliefs, potential for being a communist (even though he was vehemently against communism) and put in jail for contempt of court, where he dies of a heart attack at sixty. Among his theories were the Orgone accumulator – basically a closed box in which you sit naked and amass enough Orgone energy to cure yourself of life’s ills, including cancer. It’s thought to have inspired the orgasmatron in Barbarella and the sex box in Woody Allen’s Sleeper. He also experimented in cloud-busting with Orgone energy and Vegetotherapy which involves massaging the patient, encouraging relaxation and bodily vibration as well as questions of psychoanalysis. Reich and his supporters were harassed by locals in New York and beyond, wherever he stayed. Reich’s premise was that sexual frustration resulted in violence, fear and mental illness because of a lack of orgastic potency. Reich’s daughter is interviewed and gives the view that although the communist approach – where Reich was raised - is flawed, the American dream too is dead and lost in materialism.

The next section of the film is the fictional story but it’s hardly a Hollywood tale. In communist Yugoslavia, outspoken Milena (Milena Dravic) is rooming with a free-spirited woman called Jagoda (Jagoda Kaloper) and gives regular speeches to her fellow residents – about how true communism is not complete with free sexuality. Jagoda has sex with various men in their apartment – in fairly explicit scenes but Milena rejects a local staunch communist who seems to be trying to woo her. Incidentally Milena has pictures of Wilhelm Reich in her apartment. Indispersed with this story are scenes of a female artist casting a man’s erect penis in plaster, the editors of “Screw” magazine working in the nude and transgender actress Jackie Curtis, from Andy Warhol’s Flesh walking down the street, eating an ice-cream with his male partner and talking about her life and loves, Reichian therapist Alexander Lowen doing Vegetotherapy and Scream therapy with single and groups of patients. Is Makavejev taking this all seriously, or presenting it to us with a wink? I’m not sure. Watching Lowen at work it was hard to not feel the patient was being manipulated as he guides the woman through her paces, making her shake and vibrate through the session. The ‘Milena’ section of the film is also peppered with footage of Joseph Stalin extolling the virtues of communism and the mentally ill given bizarre and brutal treatments like electro-convulsive therapy. Would they have benefitted from a bath of Orgone energy?

As we gather more pieces of Milena’s story, she attends an ice-skating performance and meets a Russian Ice Skater, Vladimir Ilyich (Ivica Vidovic) who is definitely one of the party faithful. She brings him back to her apartment, where the naked Jagoda tries to seduce him. Vladimir is oblivious though and he tries to argue his dogmatic point of view with Milena – that Russian communism is perfect for humanity. Meanwhile her rejected suitor sledgehammers his way into her house and continues to try and woo her in a comedic scene. Away from the chaos, Milena and Vladimir continue their discussion and while he is ranting on about communism, Milena touches his genitals, to then be on the receiving end of a heavy slap from the prudish Vladimir. Despairing, Milena attacks him, slapping him again and again until they end up kissing passionately. We then hear a scream, as the screen fades to black. Later, at the morgue, two attendants recover Milena’s head after Vladimir has decapitated her with an ice skate. After a little while, Milena’s head begins speaking, explaining how imprisoned Vladimir was by his steadfast beliefs, and that she is still not ashamed of her communist background. The final image is of Milena’s head smiling over a song sung by the bloodied Vladimir, which fades to a smiling portrait of Reich.

Jeepers, what a film. It’s a little tempting to give in to the cynicism of 2015, and smirk at the naivety of the counterculture. I can’t say I believe in cloud-busting with Orgone energy or the benefits of Vegetotherapy or Orgone Accumulators. Still, they are easy targets to laugh at, and possibly Reich and his followers were delusional to some degree. For the overall message of W.R, it’s not that important. I don’t know the intricacies of communism or socialism by any means, but a community that is not hampered by sexual repression can only move forward, positively. And western society is just as easily placed in this category as any communist one. Anyway, just look at Bonobos – they have sex all the time, and are far more at peace with the world than their war-like cousins, the Chimpanzees!

The fictional section of W.R. is well played by the real-life Milena, Jagoda and Ivica Vidovic, but it’s not really an actor’s picture. They are more mouthpieces for the speeches and ideas Makavejev is trying to convey. Jagoda Kaloper is physically uninhibited in her role, and appears to be having unsimulated sex with her on-screen partner. Milena and Ivica, particularly, come alive in their final scene, Milena letting rip with frustration and passion on the hapless ice-skater. The film’s simply presented, but is a visual treat just because of what’s happening on the screen, whether it’s Milena, Jagoda and a male actor fondling an egg-yolk together or a kaleidoscope-view of a couple having sex. Even then, strip any visual tricks away and the antics of Tuli Kupferberg, Jackie Curtis and Alexander Lowen would still make compelling viewing. Strip that away, and the life and times of Wilhelm Reich would still hold this viewer’s attention.

I’d urge anyone interested in the art, and the limits of cinema to watch W. R. : Mysteries of the Organism. On one hand, it’s an interesting time-capsule into an adventurous type of film-making that will probably never exist again. On the other, it still leaves the viewer with much to think about once it’s all over. Would we live in a utopian society, if we all had sex all the time with anyone - or at least, lots with one person? An instinctive, animal side of me says yes, but I find it hard to believe all of society’s ills are linked with sex. I can’t really believe greed, cowardice and a whole raft of other problems that beset humanity would disappear in a worldwide mass orgy. But, I could be wrong! Either way, this “personal response” to the life and teaching of Wilhelm Reich is indeed life-affirming. Whether Makavejev believes in every aspect of Reich’s concepts is pretty much a moot point. He clearly does believe in pushing honesty, fearlessness and joy of life amongst his fellow humans, and surely that’s to be encouraged.

Now, please excuse me, I've spotted my pencils and paper, there's some new drawing to be done!