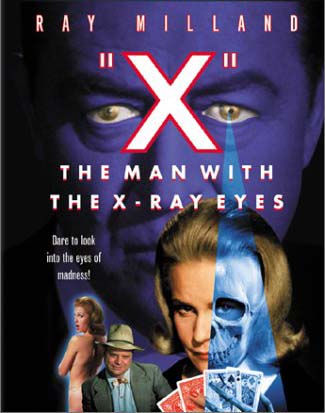 Yeehaa, a movie that starts with "X"! At least I'll have one in here. Now, enough frivolity, let's get on with a review. A simple plot belies a classic little philosophical science fiction film directed by Roger Cormon - king of the B's. Are you beginning to suspect that it's about a man with x-ray vision? Well, let's see.

Dr. James Xavier (Ray Milland), distinguished scientist, has deduced of a way to allow humans, via special eyedrops, to see beyond the normal spectrum of light, to effectively gain x-ray vision. He doesn't pay any heed when a monkey he's testing on collapses in shock at what it can see. He needs another test subject. Himself. This man is determined to let nothing get in his way of research.

At first, the effects are beneficial and Xavier can seemingly control them. He can see through clothes (as we see at a swinging party, Daddy-o) and to some extent, through flesh and into organs. But his superiors want him to slow down, to do more tests. The already obsessed Xavier will have none of it, and takes over an operation which, by what he has seen with his enhanced vision, he knows will fail. The trouble is he does it by slashing the hand of the surgeon. Our scientist could be losing his marbles.

His scientist friends Diana Van der Vlis and Harold Stone want to help him, but in a bizarre accident, Xavier kills Stone, sending him flying out a multi-story window. "X" flees in panic, and the next time we see him he's surviving on the run as a carnival act. Convinced by his slimy manager (Don Rickles) to run a healing centre (for profit, of course) Xavier examines people's diseases and puts them on the right track. Eventually Van der Vlis finds him somehow, trying to help him - she was basically in love with him - but the new plan is to cheat in Las Vegas and make enough money to do more research (or something...)

Needless to say, things go wrong from here. Xavier tops up his serum to better cheat at the gaming table. His protective sunglasses are knocked off by an irate gambling official (who can't accept his winning streak) and the new enhanced vision drives him more insane. All he can see when he looks at people are skeletons, and it's gets worse. On the run again, having abandoned his female friend, he stumbles into an evangelical tent. Ranting and raving to the preacher about the eye at the centre of the universe, he's exhorted to pluck out the "offending eye". In his maddened, desperate state, he does just that. The last image we see is bloody, empty eye-sockets.

This is a nifty little film. The main performance by Ray Milland is interesting, in that he is quite obsessed, single minded and not completely sympathetic. He does bring on most of his woes himself. The cinematography (which is really the main special effect) tries to capture the concept of x-ray vision on a low budget. Oh well, it looks psychadelic if not authentic. The script can be quite literate at times, especially when Xavier is describing his incredible power, soon to be his curse. These are the best depictions of his vision, not the cheap photographic effects. I also enjoy the score, which is often just melancholy women's singing, instead of the usual orchestral stuff.

Roger Cormon churned out numerous enjoyable movies, but this is one of my favourites. The queasy concept of seeing through everything to the point that it drives you insane resonates a bit with me somehow, and I think the film really works on this subconscious level. Don't expect whiz-bang special effects or an epic scale, and you should be pleasantly surprised.