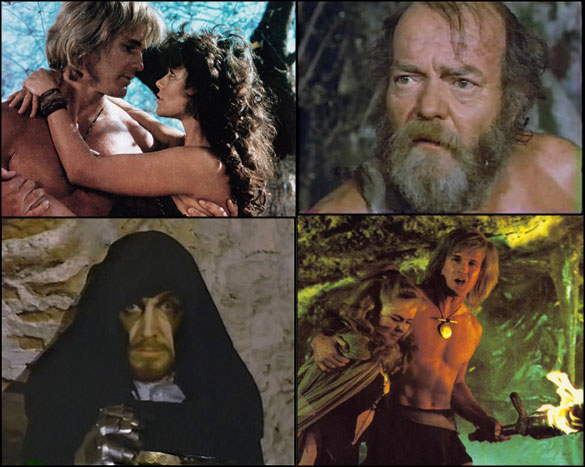 There’s a million bad movie awards, websites and books devoted to ‘bad’ cinema out there. Still, I can’t help but feel if a film’s a complete entertainment and never dull, it can’t really be classed as bad. Any film that throws muscled barbarians, dinosaurs, blue-skinned ape-men, cave people, Darth Vader-like robots, evil Sith-like villains and Story of O actress Corinne Clery into the mix has got to have intrinsic value as a work of art. And Yor, the Hunter from the Future is just that film. You won’t get any harsh comments from me about this little gem, although I’m happy to point out the odd technical limitation or two … but hey, if someone gave me a camera, a script and a schedule, could I do any better? I seriously doubt it.

Swirling two genres into one – that of the Star Wars rip-off and sword and sorcery knock-off, Yor comes out quite well to my mind. This could be due to the charm of the cast and the fact that the star wars-ey stuff doesn’t come until about two thirds of the way in. As directed by Antonio Margheriti (here billed as Anthony M. Dawson) Yor has a distinctly Italian flavour. As a theatrical release, it’s apparently a condensation of a mini-series aired on Italian television, which was over four hours. I would truly like to see this extra footage, but the film seems to flow logically enough and there’s no obvious story gaps. Let’s take a look at some story.

Opening to the strains of an unforgettable Yor theme sing, which is a bit reminiscent of a bargain-basement Queen, we meet our hero, the blonde barbarian Yor (Reb Brown) as he runs down a hill in a prehistoric world with his axe. Soon enough, once our theme song is finished, Yor moves into the jungle and finds two strangers, the nubile cave-girl Ka-laa (Corinne Clery) and old cave-man Pag (Luciano Pigozzi) being menaced by a giant triceratops. The attacking dinosaur looks pretty papier-mache and immobile but as far as I’m concerned, it’s more impressive than cheap CGI and at least the actors look like they’re actually interacting with it. Anyway, Yor comes to the rescue and slays the dinosaur with his axe, earning Ka-laa’s gratitude as well as Pag’s, who is her devoted carer as she’s the daughter of his deceased king. Taken back to Ka-laa’s tribe, Yor’s welcomed and shares in the feast. Ka-laa takes a shine to Yor and does a seductive dance for him, to which Yor begins to respond.

Unfortunately there’s a “Yor effect” throughout this film, which is any tribe or group Yor is involved with gets decimated. Ka-laa’s tribe is no exception. A tribe of blue-skinned ape-men attacks during the feast and slay most of the men, kidnapping the women and children as Yor, Ka-laa and Pag flee. They trail the ape-men to a hidden cave village and Ka-laa ends up captured by the savages. Yor knocks down a giant bat-like creature and hang-glides in to the cave as a rescue! Accompanied by the main chorus of the Yor theme, of course. Look it up on YouTube, it’s a classic scene. Yor ends up opening a dam in the cave system and flooding the ape-men, destroying their tribe, rescuing Ka-laa. Unfortunately the kidnapped women and children are never seen again – did they drown? Did they escape? Who knows.

Yor, Ka-laa and Pag then travel into the desert. Yor is looking to solve the mystery of his pendant, a shiny metal object of which Ka-laa’s tribe claim there is another wearer in the strange desert tribe. Yor leaves Ka-laa and Pag behind and enters the desert tribe area – he’s quickly captured by the strange group of almost mummified men and brought to their “Goddess” – a woman with blonde hair like Yor and the same pendant. They want to sacrifice Yor and a fight breaks out, with Yor causing a fire and cave-in, destroying all the men and rescuing the girl. That Yor effect again! The beautiful girl, Rea (Ayshe Gul) is happy to be away from the sand-mummies who kept her confined in their obsessive worship. She explains how there were others of her blonde tribe who were trapped in ice in the cave, and how the water from the ice sustained the Mummy-men. They rejoin Ka-laa and Pag, Ka-laa being none-too pleased with a new woman on the scene. Eventually things come to a head between Rea and Ka-laa and the jealous dark-haired girl attacks Rea with a knife – until Yor breaks things up. Unfortunately the still-living leader of the blue-skinned ape-men attacks again, and Rea is killed by a blow to the head from a club. Grieving from the loss of his tribeswoman, Yor, Ka-laa and Pag rescue some cave-children being attacked by a small dinosaur and are taken in by another tribe. The leader of the tribe offers Yor his teenage daughter Tarita (Marina Rocchi) but Yor passes on the offer, he only wants Ka-laa. Still, the trio are welcome by the beachside tribe, until the Yor effect occurs yet again and the tribe is basically destroyed by lasers shooting out of nowhere, apparently from off-screen flying saucers. After burying their dead, what remains of the tribe send Yor, Ka-laa and Pag to the island of their persecutors in one of their boats.

This is where the Star Wars aspect of the film kicks in. Once on the island, Yor, Ka-laa and Pag are being monitored by the sinister Overlord (John Steiner) an Emperor Palpatine-like villain. Overlord has sinister robots that look a lot like Darth Vader who attack the group and bring Yor to his lair. With malicious intent, Overlord explains to Yor his origins. The Overload and his people (who all have blonde hair except him) and, in fact, all the people of this mostly primitive Earth are the survivors of a nuclear holocaust. The Overlord’s island still maintains its technology, and the evil tyrant is seeking to take over the entire planet with his mindless robots and clones. He also wants to use Yor and Ka-laa’s progeny as a new breed of genetically superior, but mind-controlled servants. At the same time a group of blonde rebels lead by Ena (Carole Andre) meet up with Ka-laa and Pag and begin to attack the Overlord. Ka-laa’s captured again and thrown into a hall of mirrors with Yor where they cannot locate each other, but they manage to find each other again for a big clinch. Teaming up again with the rebels and Pag, Yor and Ka-laa begin the final battle against Overlord and his dark and deadly robots. We’re treated to some enjoyable scenes of battle including a trapeze act by Yor and Pag as they swing cross a huge chasm to safety. Eventually, with the help of an old rebel, the Overlord’s ‘hybrid clones’ – they just look like robots to me – are shut down and the tide begins to turn against the cackling baddie. Will Yor, Ka-laa and Pag prevail? Will the Yor effect happen again and another community be blown away? Perhaps, best to watch and see!

I can’t help but feel that Yor offers so much entertainment value, and crams so many fun aspects into its mix that I’d rather watch it a thousand times over a Hollywood blockbuster. Sure, the dinosaurs are papier-mache, but at least they’re real objects that the cast can interact with, in a limited way. Reb Brown, Corinne Clery and Luciano Pigozzi put their all into their roles and seem to be enjoying themselves. John Steiner as the Overlord rivals Joe Spinell’s cackling Count Zarth Arn from Star Crash for scenery-chewing and ham. The u-turn into science-fiction star wars tropes in the final third is a nice surprise for first-time viewers and adds to the film's re-watch value. Then you’ve got savage blue ape-men referring to Yor as a ‘bastard’ and lines such as Yor’s “damned talking box” to quote to your friends as well. Not to mention a great theme song that you’ll have over and over in your head for weeks.

Hopefully Yor, the Hunter from the Future will secure a Blu-Ray release in the not-too-distant future. I’d like to see a print as crystal clear as it should be, and not taken from a wobbly VHS rip. It would also be a treat to see the full Italian mini-series that Yor’s been cribbed from – perhaps the “Yor effect “ would seem a bit more spaced out, and our hero actually spends some quality village time with folks before they’re blown up. In the end though, Yor’s worth tracking down in whatever state it’s available. Thankyou Messrs Margheriti, Brown and Pigozzi, and of course the lovely Ms Clery, for an hour-and-a-half of pure eighties-style viewing pleasure.