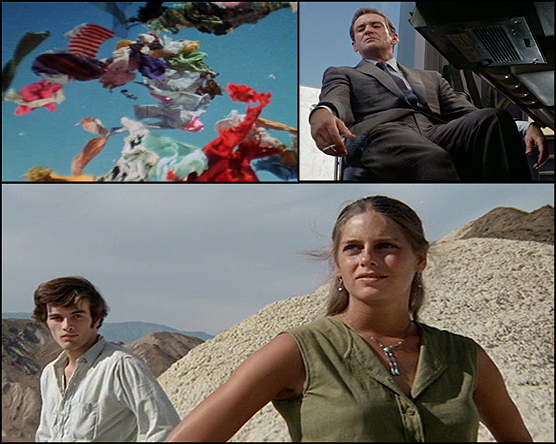 Unfairly maligned, and a box office bomb at its initial release, Michelangelo Antonioni’s Zabriskie Point really merits a second look in our modern age, containing much to ponder in the ceaselessly materialistic world of today. Beautifully filmed with superlative desert landscapes, music to die for and themes a lot of us can relate to, it’s a film ripe for repertory showings and a blu ray release. It’s got a couple of my all-time favourite scenes in cinema, so that makes my reservations about a couple of minor elements evaporate like a droplet of water in the Death Valley sun. I have no idea if the film has a cult following at all, but I truly hope it does. Essentially it’s a celebration of youth, naivety and innocence, battling for its existence in a crass, corrupt and materialist world.

I mentioned about a couple of moments in this film being some of my all-time favourites … the opening few minutes are included in that love. To the mind-blowingly fantastic music of Pink Floyd throbbing in the background, we meet a group of revolutionary students planning violent action against ‘The Man’ threatening their strike at a university. The camera pans around their young, lovely faces discussing and arguing, cinema verite style. There’s just something about this section that I adore, be it the music, the naturalistic presence of the extras – they can’t be professional actors – or their passionate views about how to fight The Man. Amongst this group is Mark (Mark Frechette), a surly young man who quickly bores of the back-and-forth arguments and leaves to challenge the system in his own way. Visiting a friend who’s already been thrown in jail by the oppressive cops, he’s quickly thrown in with the prisoner due to his attitude, giving his name as ‘Carl Marx’ to the ignorant officer signing him in. Released soon enough, he’s even more embittered against the establishment, and buys a gun to ramp up the coming war roiling in his mind.

Meanwhile Daria (the ludicrously beautiful Daria Halprin) has entered the building of real-estate mogul Lee Allen (The Time Machine’s Rod Taylor) and appears to get a job from him, explaining that she does these sorts of jobs occasionally just “for the bread.” Lee is wheeling and dealing for a crass real estate package in the desert, but also seems a bit lost in the world and we often see him smoking his cigarette, looking pensive. Back at the student protests, the situation has gotten more violent than ever. Protestors lie bloody and broken on the ground, tear gas swirls in the air and guns are emerging. After an innocent student is shot, Mark motions to shoot the offending cop but it’s pretty obvious the cop is shot by someone else. Still, Mark’s face is caught on-camera by the media and he flees. At a nearby airport, he tricks a flight mechanic into beliveing he owns one of the light planes, taking off and escaping into the desert. I guess he’d learned to fly a plane somewhere along his young life!

At this point, Daria and Mark’s journeys intersect. Daria’s travelling to Phoenix to meet Lee at a ‘conference’, supposedly. On the phone to Lee, she confuses him by leaving the route and trying to track down a meditation guru who looks after troubled kids. She finds a band of semi-feral children who virtually seem to live in the desert. Weirded out by this scene, she leaves again and drives her old car through a sumptuously barren landscape, only to be buzzed by Mark’s plane. She’s at first shocked then bemused by her harasser, who drops a red nightdress out of the plane for her. Eventually they meet in person when Mark lands. They seem to hit it off straight away – odd really, when he’s been swooping her with a deadly object – and gives him a lift to an eccentric old man living in a shack who can give them supplies. Before reaching their destination they stop at Zabriskie Point, a geographic area of tourist interest in Death Valley amongst the dust and sand. They talk about their young lives, become uninhibited, philosophising about life and fighting the system while Daria smokes a joint. They frolic and play in the dunes, finally making love as a number of members from “The Open Theatre” join them in a dusty - and mainly clothed - orgy. I guess some would call this a silly, naďve scene but you can see where the filmmakers are coming from – it’s a celebration of playful, free sensuality where nature takes over and civilization is stripped away. Some of the participants are a bit rough on each other, I would have directed this troupe to be a bit more gentle and sensual, but that’s just my sensibilities. Daria and Mark seem to be having fun, anyway.

Later, Daria and Mark encounter a lone, suspicious cop who eventually leaves after asking Daria questions. Mark had stayed in hiding while brandishing an empty revolver. Daria realises Mark’s the plane-stealing maybe-murderer. Mark explains it wasn’t him, and he’s going to return the plane and try to escape. The pair and the old man who helped them out paint the plane with some cool counter-culture and revolutionary slogans, and Mark takes off. Were they planning on meeting up again? Who knows. Mark returns the plane, but the police and media are lying in wait and shoot him dead before he even leaves the cockpit. Daria hears the news on the radio, swaying gently in the desert breeze as she processes the terrible information. It’s a beautifully shot scene.

Having nowhere else to go, Daria drives on to Phoenix and joins Lee at the huge, luxury desert house where the ‘conference’ is meant to be taking place. It seems more like Lee has designs on Daria, rather than have her help out at a work function. Dismayed by the empty opulence of the participants, and meeting up with a Native American woman turned maid, Daria despairs and flees Lee and his greedy cohorts. Before she drives off to a more true-to-herself future, she turns towards the house and gives it one last angry look … and watches the whole place explode spectacularly into a million fiery fragments. By God, this has to be one of the most amazing cinematic explosions ever filmed … it sure doesn’t look like a model house being blown apart. Not only do the film-makers blow up an entire expensive house, they then go to blow apart refrigerators – and their contents, including flying frozen chickens – racks of clothes, shelves of books, televisions and other sundry items, all in glorious slow motion to the accompaniment of screeching Pink Floyd music. It’s a stunning scene, dear readers, again one of my all-time favourites and perfectly captures the rage an individual can feel against the suffocating establishment. We’re watching the cathartic blowing apart of the material world, bringing about a long-sought for release. Daria, her vision of flaming destruction complete, drives off to an uncertain future full of youthful potential.

As I mentioned earlier, I do have some small reservations about Zabriskie Point. Not professional actors, some of Daria and Mark’s line delivery tends to be amateurish and flat. If you accept the film as a celebration of youth, it’s no real problem as young people often struggle to communicate with each other, let alone the wider, big bad world. The protagonists meeting under such strange circumstances and instantly hitting it off, could be hard to believe unless you take the film as a counterculture fantasy, despite the verite opening scenes. I prefer to love this film though. Staggeringly beautiful at times, either through natural scenery or human forms and faces, Zabriskie Point is captivating throughout. With effective music by the Grateful Dead, Pink Floyd and others, it’s an aural treat as well as visual beauty as we follow Daria and Mark travelling through the hypnotic desert environment. Antonioni fills his city scenes with endless billboards and advertising, depicting a hollow America obsessed with products, materialism and money, something that can only be escaped through violence or isolation.

No doubt made by Antonioni and the producers as a major big-budget Hollywood product that was meant to bring plenty of ticket buyers into the cinemas, Zabriskie Point is still a work of art that has something worthwhile to say. At the time, it may have come too late to champion the fading counterculture movement. It may not have impressed many seventies critics or moviegoers. It may not have made much money. It may not even have much of a cult audience today, I have no idea. I still feel it captures so much of the essence of youth and vitality in its various scenes. The push against authority where it’s warranted, the freedom of expression before the ‘adult’ world clamps down on us, the living in the moment where consequences don’t exist. Connect that with handsome, charismatic actors – despite their line readings – the beauty of nature and the lure of the sky and the open road, and you’ve got a gorgeous, memorable film that deserves to be seen on the big screen in all its glory. I strongly recommend Zabriskie Point to cinema fans who are either still young or remember being young, and still feel that way at heart.