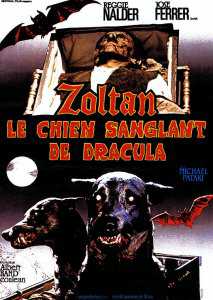 A film entirely about Vampire dogs.

Yes, it's true, this is one of the strangest films I've ever seen. Dracula is only in the film for about twenty seconds, the rest of the time the monster is a glowing-eyed, roaring Doberman with vampire fangs. Plus the growing legion of vampire-dogs he creates. As they say in the classics, would you like to know more?

In seventies Romania, the armed forces unearth a tomb of the dreaded Draculas. Within the tomb te resting place of Zoltan, Hound of Dracula is unearthed, and a hapless soldier pays with his life for removing the stake from the vampiric canine's heart. Zoltan, described as above, removes the stake from his keeper, Veidt Schmidt, (a wizened, corpse-like, sunken-faced Reggie Nalder). As the tomb begins to crumble, Zoltan and Schmidt leaves the area to find a new master. Inspector Branco, noted vampire-hunter (Jose Ferrer, languishing somewhat here) orders the remaining corpses burned, but ponders on the mystery of the two empty coffins. Upon some further research he realizes that one of the departed fiends is Schmidt, a "fractional lamia" or part-vampire, who can function in daylight, has no thirst for blood, and find victims for their vampire masters. Branco also realizes that Schmidt, in order to survive, will be searching for the last of the Draculas, Michael Drake (Michael Pataki) who now lives in Los Angeles, good ol' U. S. of A. Michael is not yet a vampire but Schmidt would soon see to it that he becomes one.

In the meantime Schmidt has taken Zoltan aboard a boat, heading towards America. We see flashbacks to the vampirizing of Zoltan by Dracula (Michael Pataki again - he isn't much of a Dracula) and lamia-ising of Schmidt. Then, we the explore the lives of Michael and his wife and two children, who adore dogs. They have two large adult dogs and two puppies, they are preparing to take on a camping trip. Zoltan and Schmidt are watching them though, and as we often hear throughout the course of the film, Schmidt tells the creature "Soon", to wait for the attack. I can't tell you how often this is said in the piece, it's certainly Nalder's main line. For some reason Nalder never speaks, we only hear his voice as the actor glowers with shut, pursed lips.

The trip goes ahead, but of course they are followed by the diabolical duo. One of the puppies is killed by Zoltan, and we're later treated to a scene of the glowing-eyed puppy rising from the grave and trotting off. Yes, really! Schmidt then commands Zoltan to kill a fellow camper for some reason, which is quite a gore-filled scene. The only one really, this is quite a mild film for the most part. He then vampirizes an adult dog for his vampire-dog army, and they begin menacing the Drake family. Branco finally tracks the family down at their camping grounds and tries to explain why they are being stalked by wild dogs. The family is sent home after the young daughter is attacked and only just escapes, and Michael and Branco remain to face the ever-growing hordes of Vampire-dogs.

Holding up in a small cabin, they prepare with stakes as the dogs attack, tearing at the little shack, emitting quite frightening devil-dog sounds! Finally they break in, but the sunlight of dawn wards them off. Later that night, Branco discovers the hearse that contains Zoltan's coffin, but Schmidt attacks, only to be killed (staked) by Branco. Schmidt certainly makes some weird sounds as he fights, but who am I to question what a fractional lamia sounds like? Meanwhile, Zoltan and his cohorts attack Drake in a car, in a canine-versus-human fight to the death. Who will survive to live and bark another day? And what of that puppy?

You could only call this one unique. It's well-made, and looks especially good on DVD, I must add. The seventies photography comes up quite nicely. Jose Ferrer and Michael Pataki take their roles deadly seriously, despite the ludicrous concept. Ferrer particularly, puts in quite a commanding performance. Most of the Nalder/Zoltan scenes are pretty silly, and there's padding aplenty as a glaring-eyed Nalder exhorts the monster to yet again "be patient". Why not attack Drake back at his house, when they had him dead to rights? Who knows. But the dog-sounds did scare me a bit, and it's never really boring. That's all you can really ask of something lightweight such as this. Give it a look if you're a completist for vampires, or odd horror cinema. I think it's fun in its own strange way. Oh, now that I've finished writing, here comes my puppy ...