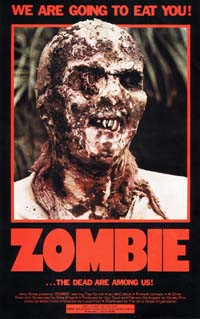 I've finally caught up with the uncut version of this Lucio Fulci classic gorefest. It was worth every cent. If you're into zombie films in any way, shape or form - I sure am - you've got to see this film. It's one of the staples of the "cannibal zombie" subgenre of horror that George Romero's "Night of the Living dead" gave messy birth to. These films really let rip in the eighties, tapping into some sort of subconscious yearning, and many horror fans love and even emulate them today, with their own films. The ultimate outcome of this was Peter Jackson's "Dead Alive", probably the ultimate splatter film. Who needs artsy-fartsy films, when you can watching the rotting undead pull out and eat entrails from their living compatriots?

An American woman, Ann, (played by Mia's sister Tisa Farrow) and a reporter are trying to find her missing father, who disappeared on the Caribbean island of "Matool" shortly before. In New York an abandoned yacht had sailed itself in, it's lone, and decidedly decaying, occupant attacking and killing one of the investigating police. We find out the yacht was owned by Ann's father and this causes them to find their way to the island in search of him. Even before the action really starts we're treated to a topless actress, one of the crewmembers of the boat finding its way to Matool, being stalked by a shark, who in turns has chunks bitten out of it by an underwater zombie. Hey, it's an odd scene but not that frightening.

Once on the island, they meet Dr. Menard and his entourage. Dr. Menard, sweaty and dishevelled from his deliberations, is trying to solve the problem of the "virus" killing villagers and causing them to rise again as mindless cannibal killers. Others on the island believe it's voodoo, and we can almost always hear voodoo chanting in the background. One thing Menard knows though - only a blow or a bullet to the head will kill off a zombie. We see many bound corpses cop a close-up bullet in the brain. The hospital is a fly-infested, blood-soaked mess of a hovel. Things aren't going well for the Matoolians.

Before long, it's revealed that Ann's father has succumbed to the disease or voodoo (we never really find out what's behind the zombies) and has also been blown away after death. Now it's just a case of getting off the island alive, as the walking dead are growing in numbers and devouring the living. Menard's wife gets a giant splinter in the eye by a savage zombie breaking through her door, and is summarily devoured by a group of ghouls. The living are picked off one-by-one by zombies until after a fiery confrontation in the hospital where they are trapped, the last three survivors make a break for it. Unfortunately, New York, as revealed by the boat's radio, has been overun by zombies, who are crossing Brooklyn Bridge en masse.

Oh, it's all a joy for the gore-hound in me. Eyes are pierced, throats bitten out, zombie heads lopped in half and half-eaten bodies eaten some more. The zombies are great monsters, slow-moving shufflers, their eyes closed in death (they must have a good sense of smell), their skin crumbling, bleeding and rotting, breathing hoarsely as they advance on the frozen-to-the-spot living. As soon as they are close to someone, they become fast-moving killers and someone's throat is usually the worse for wear. I prefer Fulci's zombies to Romero's green-painted recent dead which have less effort made on the makeup.

The voodoo/island setting seems nice and traditional, too. Lots of rich colours and the shots of the village wastleland as the island falls apart are effective. The acting's reasonable for this sort of film, with the frustrated doctor coming off quite well. Tisa Farrow's okay but really only has to play "upset" or "in peril". I love some of the panning shots in the hospital which show just what a ramshackle hovel it is. I think Fulci's a good visual stylist! I don't love the electronic music but it doesn't really detract from the film, being reasonably underplayed. It's no "Goblin" but didn't have me gritting my teeth or anything.

To sum it all up - if you like zombies, this one's a classic. If you like gore, it's a must see. Into horror? Give it a look. Otherwise, steer clear of Matool. It's really only for those of us that are hardcore horrorists. The rest of you might want to chart a different course.