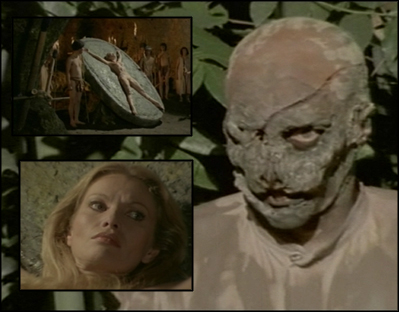 Some films, no matter their shortcomings, lapses in plot logic, lack of budget, finesse in the film-making process and innumerable other faults, simply can't help but entertain with their attitude of, 'it's all on the table, baby, take me or leave me!' The Italian ultra-gore opus Zombie Holocaust is one of those films. Director Marino Girolami has thrown everything an exploitation fan could want into the mix, and though cheaply done, something kind of loveable comes out. Even the title is something of a misnomer, but we'll get to that later. It kind of adds to the off-kilter charm, anyway.

A hospital in New York is being plagued by a strange wave of mutilation on it's research cadavers. Hands are being lopped off, hearts torn out from bloody chest cavities. Dr. Dreylock (Walter Patriarca) and his gorgeous research assistant Lori Ridgeway (the uber-pneumatic Alexandra Delli Colli from The New York Ripper) want to find some answers. When one of the orderlies is caught eating the heart out of a corpse, then jumps out of the building to his death, naturally Dreylock and Lori are shocked. Before he dies, he mutters 'Kito', then expires. Lori notices a strange symbol tattooed onto the dead man's chest, and as a trained anthropologist as well - this woman has many talents - she recognises it as from the legendary cannibal island of Kito. Helping the police with their enquiries, Lori is told that other cannibalistic murders have taken place, with similarly marked offenders dying at the scene. Dr. Peter Chandler (Ian McCulloch from Fulci's Zombie Flesheaters of which this film is basically a rip-off) is in charge of the case, and begs Lori to assist him in a journey to find Kito and solve the mystery. Initially reluctant, she relents and agrees to go with him. As Lori strips off into some flowing lingerie to relax - this type of scene happens a lot in the film - she's rudely interrupted by nosy reporter Susan Kelly (Sherry Buchanan) who wants answers of her own. She eventually gets rid of Susan, then meets her again as a member of the exploratory team the police has assembled.

Along with George Harper (Peter O'Neal) Chandler's assistant, the group leave for the Pacific islands where Kito is meant to be located. They stop at one island and meet lone scientist, the kindly Dr. Obrero (Donald O'Brien), who offers his shifty assistant 'Molotto' (Dakkar from Zombie Flesheaters again) to navigate them to Kito. First, though, they stay the night at the island - cue Lori to strip again for an early night's rest - and the girl is shocked by the decomposing, severed head placed on her pillow. Obrero seems strangely unmoved, and claims that if the natives had wanted to hurt her, they would have already. Eventually, minus Obrero, they all leave for Kito but Molotto claims to have gotten them lost, and runs aground on another island. They become aware of being followed by Asian-looking natives and eventually one of their party is graphically trapped in a spiked trap, then has his throat slit and is disembowelled by the muttering cannibals! They are on Kito after all - Molotto was mistaken. Another native member of the camp is killed - off-screen - and is left a half-eaten mess. Harper is next to die, being disembowelled, throat slit and even his eyeballs gruesomely eaten as desert! This film does not hold back on the gore, folks, even if at times it's less than convincing. I'm not sure why these cannibals have a major preference for raw intestines, and why they're in such a hurry to chow down all the time, but who am I to question their motives? Susan is carried off by the cannibals, and all looks like certain death when ... the Zombies arrive! About four Zombies, to be exact. With their odd moans and wheezes, the slow-moving, mouldering zombies, who look like a cross between the denizens of Zombie Flesheaters and The Nights of Terror, scare the natives away. Getting away, Lori and Peter make contact with Obrero, who tells them to come to an old white church where he'll come and meet them, and take them to safety.

No sooner do they turn up, than Obrero tells them to go to a dinghy on the beach and escape. Peter is suspicious, but they go anyway. The dinghy's motor won't start, and suddenly a Zombie lurches at them. Our hero graphically hacks it's head to pieces with an outboard motor! Talk about bang for your buck! The other zombies overpower them - these aren't your typical cannibal-type-zombies, and are quick moving and have some focus. The creatures drag them back to Obrero and Molotto. Meanwhile, we see that the crazed Obrero has been operating on Susan - having bloodily removed her scalp and is in the process of cutting out her vocal cords, as the screaming is annoying him. Nasty... Obrero opens her skull with a skull-saw in preparation for transplanting her brain into a waiting native corpse. Obrero greets his prisoners, and rants about how they will become part of his great experiment which will prolong human life a thousand-fold. Obrero confesses that it was he who urged the natives to become cannibals again, in order to furnish victims for his heinous experiments.

Lori somehow manages to escape and finds herself in the grip of the cannibals again. They strip her naked - nude again are we, Alexandra? - and for some reason, the native women paint flowers on her lovely form. They lie her down on a sacrificial table and begin chanting as a dagger for just that deathly purpose begins to rise. In the next instant the table mysteriously lowers an the cannibals become strangely excited, halting their sacrifice-in-progress... Back at Obrero's laboratory, the drugged Peter begins to awaken. He is going to have his brain transplanted into a dead native's skull, creating another Zombie like the ones that dragged him there. The resourceful Peter cuts himself free and slices Molotto's throat. As Obrero moves to attack him, the cannibals storm the building, with Lori coming along with them! They attack the Zombies, and Obrero. Will anyone survive the ultimate cannibal attack? And will there ever be a 'Zombie Holocaust'?

The short answer is ... no. These 'Zombies' are just Obrero's mindless lackeys, really, and there's not even that many of them. They just happen to look like Fulci's gut-munchers. It's the cannibals that do all the flesh-ripping, but hey, they're enthusiastic and do it well. Although, I have no idea why they end up deciding to free Lori and attack Obrero and his zombies. All up, you can kind of view this film as a gore and nudity-filled comic strip. The jungle locales are actually quite lovely. The beauteous Delli Colli's undressing and nude scenes go on forever, and they're plentiful. The gore starts up in the opening five minutes, and barely lets up for the entire running time. Donald O'Brien steals the show as Dr. Obrero - who is virtually your eye-rolling, cackling Dirk-Dastardly-type Mad Doctor who happens to wield a lethal skull-saw. The acting by the rest of the cast is serviceable, with both Ian McCulloch and Delli Colli lending quite a bit of class to the proceedings. It's a blending of the cannibal and zombie genres, with the cannibals taking centre-stage. And, at least there's no real-life animal cruelty like in some of these cannibal flicks.

So, what we do have here is cheap, vigorous and nasty, and perhaps an opportunity for a clash between cannibalistic Zombies and well, Cannibals, is missed. Still the entertainment value, at least for gore 'n' nudity-hounds, is high. If you're in the right mood, this little piece is well worth a view.