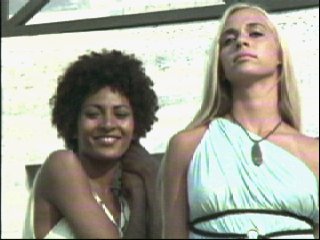 Also known as Naked Warriors, this is a minor exploitation classic co-directed by Joe D'Amato, of Beyond the Darkness and a gazillion other trash classics, fame. It's really got everything a fan of this stuff could want. A great start is starring Pam Grier, that's for sure. What an era of film-making the seventies was! We just won't get another wave of fantastic entertainment like it. I'd better stop my old codger rantings and get on with this review. I'm sure there's superb stuff in any decade - but brothah, I'm stuck on the seventies, my man.

So, to the Arena. Nubian Princess Mamawi (Pammy) and Gaelic Princess Bodicia (Margaret Markov) are kidnapped as slaves by the Roman Empire. Their countrymen are killed by centurions, they are all that is left. Mamawi is forced to be a dancer for the Roman master, while Bodicia is raped by an unknown Roman. As they unwillingly settle in to slave life, they witness their male counterparts fighting to the death for entertainment as Gladiators. The audience has become bored even with blood and death. Can you tell where we're headed? I bet you can.

During a fight with a female slave who claims to be a Roman citizen (and who's basically a bad egg), Mamawi and Bodicia are spotted by their Roman slave-masters, who come up with a fiendish idea. To placate the discontented crowds, why not have women fight as Gladiators? It's not like they have any choice in the matter.

So before long, Mawawi is facing off against a drunken Deidre (Lucretia Love) in a comedy match. So far so good, but each battle becomes more serious and eventually Mawawi, a natural survivor, is forced to kill the lover of the Gladiator charged with training them all. Finally Mamawi and Bodicia are forced to face off against each other in a duel to the death. Who will survive? Well, this ain't the end, folks. We've still got a major rebellion on our hands, which will kill off most of the evil cast.

I have a theory about this film - it's basically a "women in prison" movie set in Roman times. There's also elements of sword and sandal and blaxploitation, but the classic "WIP" elements are there. You've got a mixed race group of prisoners, you've got the effeminate "warder" played by Sid Lawrence (I think), the evil prison guard, Cornelia, played by the still-gorgeous Rosalba Neri - see her star in Lady Frankenstein - and all the copious nudity (thank you, Pam) via several nude, sex scenes and rape scenes that a WIP film can muster. And of course, you've got the all-out rebellion at the end which completes the analogy. Just while we've just mentioned Lasy Frankenstein, this film also features Paul Muller (The Baron's assistant Charles from that movie) in a small role. So there you go!

Do I recommend The Arena to all you kind readers? Very much so. It's not perfect by any means, but perfection can spawn a pretty sterile sort of movie. It's got rough edges galore, especially some of the support actors emoting their way straight from a silent twenties melodrama. The camera work can be shaky, the edits choppy. Did I care for a second, when Pam Grier was walking across the room clad only as nature intended?

I think you know the answer to that question.