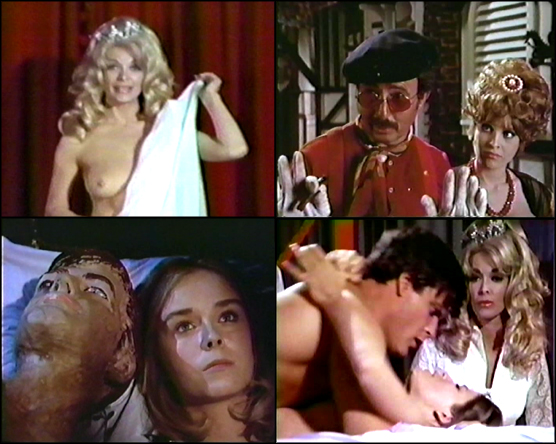 "It's not his nose that grows!" 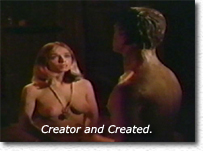 The blonde-wigged, buxotic Ms. Thorne plays "The Fairy Godmother" and she introduces our film, which is only credited as 'Pinocchio', and does an erotic strip as she does it. Nice start. In a fairytale land, we meet the young Gepetta (gorgeous Monica Gayle), a female woodcutter who lives alone. In her loneliness, the virgin Gepetta has carved herself a life-size wooden man, whom she calls Pinocchio. Though he doesn't move one iota, Gepetta and Pinocchio seem to hold conversations, but it could all be in her head. Gepetta puts a heart necklace around Pinocchio and tries to make love to him. Strangely, the experience with the inert dummy is a dissapointment. The nude Gepetta stands the lifeless figure up, and sadly leaves. Who should turn up in the room but the Fairy Godmother, who introduced our film. Pinocchio 'talks' to the beautiful woman as well, so he must have a soul in there somewhere. The Fairy Godmother senses his pain, and offers him life as long as he's good. If he doesn't behave, well, then there'll be problems. Pinocchio agrees. The Fairy Godmother flashes her wand, and first her clothes dissapear. This happens a lot in the film! The second time's the charm, and the wooden statue turns into a handsome living man, played by Alex Roman. Happy that she's done a good deed, the Fairy Godmother vanishes. No sooner does Pinocchio begin to find his bearings, than he turns around to find a dapper little guy wearing a beret, Jo Jo (Eduardo Ranez) in the room with him. 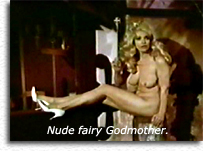 Jo Jo's a man on mission. He sees the seemingly dim-witted but studly young guy as a potential hit at his bordello, Mabelle's. He explains to Pinocchio that as he and Gepetta are both virgins, he owes it to to his maker/lover to get some experience first. Jo Jo introduces 'Pinocch' to Mabelle herself, the buxom redhead Karen Smith. They try to persuade him to join them at Mabelle's. The Fairy Godmother appears and tries to convince Pinocchio to stay and make love to Gepetta. She tries to hit him with a 'freeze' charm buts ends up naked again. Pinocchio gives chase to Dyanne, and we get a comic montage of the both-naked pair running around the streets in fast-motion. Finally the Fairy Godmother brings her wand under control and freezes Pinocchio, reminding him to only go to Gepetta when he 'un-freezes' in the morning. Later, Mabelle and Jo Jo discover the motionless man and looking under his coat, realises what a stud he truly is. Jo Jo draws's Pinocchio's attention to Mabelle's obvious charms, and he soon un-freezes, dazedly following the pair into the bordello. The naive young hunk is a hit with Mabelle and is soon having sex with her. Mabelle throws Gepetta's locket into a box with her other jewellery. The well-hung fellow leaves Mabelle in a dazed, euphoric state and has soon worked his way through all the girls. As Jo Jo surveys the aftermath, the bordello is wall-to-wall dazed naked women. One is even hanging from the rafters! Jo Jo leaps for joy. 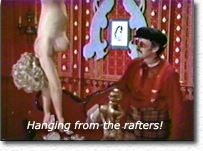 Pinocchio tries to leave for Gepetta again, but Jo Jo and Mabelle convinces him to gain just a little more experience. They bring him into a room with some naked, unconquerable lesbians who are going at it. One of them happens to be Uschi Digard, in a ten second cameo. The lesbians throw him across a room a few times, but the crowd soon cheers as Pinocchio wins them over and turns it into a threesome. Jo Jo then persuades the hunk to stay and work for him, as being a proper couple with Gepetta will require money. Of course, working for Jo Jo means servicing female customers. We see Pinocchio knowing several women in the biblical sense, which is accompanied practically by an earthquake each time. Under the pretext of becoming 'famous', Pinocchio is lured to a sexual marathon that night at the bordello. Each nude woman rises to the podium as if it's a boxing round, but as he can never tire, Pinocch always prevails. The Fairy Godmother appears mid-copulate and warns Pinocch that something bad is going to happen. Pinocchio won't listen. Sure enough, his penis begins to grow to a prodigious size. He runs from the 'tournament' in horror and pleads with the Fairy Godmother to make him normal. She gives him one last chance, and his member is human-size again. Trouble brews again and soon Pinocchio is lured, under the pretext of becoming a real man, to having sex with Mabelle. Now his penis is about ten feet long and has to be held away from his body with an elaborate scarf system! The customers are scared away, but Jo Jo has a last desperate idea, as the huge penis is smashing everything in its path. Pinocchio will be the 'centrepiece" of a decadent Bacchanalian orgy. The customers should come in droves. 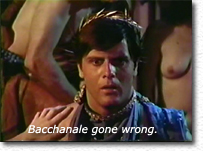 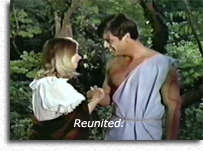