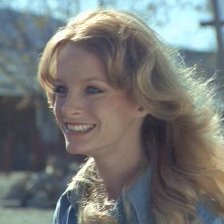 This is one of the more well-known of Drive-in Queen Claudia Jennings's movies. I've already reviewed Gator Bait in these pages, and I urge you to read that roundup 'cause I think it's an unfairly maligned film. Truth be told, I've only seen two Claudia movies and this is the second, but with titles like Unholy Rollers, Truck Stop Women, Moonshine County Express and Deathsport, you can bet your bottom dollar your old Uncle Boris has a hankerin' for more. Keep watching GGG for more Jennings fare.

Claudia plays Candy Morgan, just escaped from Prison (crime undetermined) and quick to rob a bank with a stick of dynamite she stole from the big house. Going home briefly to her loving pa', who is proud of what she did, she strikes out again with another bank job. This time, Ellie-Jo Turner (the feisty Jocelyn Jones, who practically steals the film) is being fired for being late for her dead-end bank job. Half-afraid and half-fascinated, Ellie-Jo helps Candy escape.

The cowboy joins Candy and Ellie-Jo and becomes a professional hostage. They steal more money than they could dream, have decadent stopovers in plush hotels, drive a rolls-royce, and generally live the high life. But, of course, the Law is on their tail and blaming them for a murder they had nothing to do with. Funny, that. The shortgun-wielding Bubbas make sure it ends badly for the cowboy, and our heroines are left to face down the redneck cops and make a last dash for Mexico. Can they make it to the promised land, and freedom?

The similarities to this and Thelma and Louise are legion, as you can probably tell just by reading my little synopsis. Somehow though, this seems the more honest film, missing all the deadly pontificating and big-budget slickness. There are excellent performances, especially Jocelyn Jones, who lights up the screen with her spunkiness, and the ill-fated cowboy. Claudia as Candy seems a bit muted in this one, probably because she had been injured during the shoot (I think) and was on painkillers. She does look quite "washed out" in some scenes, which is a shame, but hey, nobody wears Daisy-May shorts like our Claudia. Her appeal still shines through. I love the light-hearted feel of the film - it's almost a comedy - and the fantastic music that runs through the entire piece. I've got that jingling piano on my mind right now. There is some violence at the end that seems somewhat out of place, but doesn't ruin the whole.

If you're a fan of the drive-in movie and have a liking for Claudia, please take a look at the Great Texas Dynamite Chase. Come to think of it, there isn't that much chasing going on in the film, but I'll forgive it that little thing. Any film that has dumb-ass Texas cops getting their cars blown up by gorgeous, scantily-clad women wielding sticks of dynamite, has got to have something going for it. You've got so much white-trash fun on the screen, you really can't go wrong.