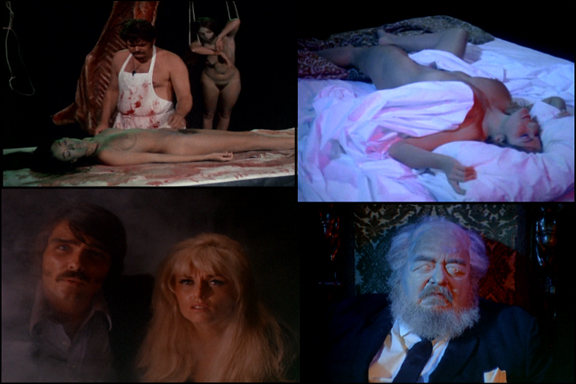 Once again, I have to bow to the achievements of producer Harry Novak, and gaze in awe at the results. Along with director/writer Ron Garcia, they've created a pure gem of a film in The Toy Box, one of the most enjoyable little movies I've seen in many a year. I can only urge any cult, horror or sleaze fans out there to pick it up, I can't imagine anyone who reads these pages regularly being dissapointed. Then again, how any film that shows buxom screen goddess Uschi Digard naked on a revolving bed, being caressed by the bedsheets of the bed can be passed up by anyone is beyond me. Let's look inside this particular toy box.

Eventually they arrive at Uncles' castle. Initialy clothed in evening wear, Donna strips off but is apparently, completely drunk. Ralph berates her and eventually she sucks him off. Later she screams seeing her booze-raddled, blotchy face in a mirror, then they both laugh. They were practicing a 'performace' for Uncle. Donna asks if Uncle is really dead as some people say. Ralph doesn't care, as long as the fun and money keeps flowing. They discover what seems to be a dead, or at least a semi-dead Uncle (Jack King) propped up in a chair whose mouth moves very occassionally, but they don't seem too concerned. Eventually we see what sort of shenanigans go on at Uncles' festivities. As a joyous semi-naked crowd cheers or booes, two naked women crawl on all fours and are whipped by the Roman-robed man who holds them on leashes. The two girls are then unleashed on a buxom, nude Maria Aronoff, one of the beauties from Fantasm, sucking her breasts and generally pleasuring her. The Roman fellow then has sex with Maria, and the crowd cheers them afterwards.

Later, our Uschi, one of the guests, prepares for bed in the castle. She opens a box and a hand comes out, begging to be released. She forces it back in. The comatose-looking Uncle, blank, white eyes staring, seems to be communicating with Uschi as she tries to go to sleep. He demands that Uschi gives in to him. The bed begins rotating, and as multi-coloured lights flash, the sheets come to life and remove her nightie, massaging and fondling her to absolute ecstacy. The film is worth the purchase price for this scene alone, but there's a lot to come that's a feast for the eyes, rest assured. Still, I've rarely seen the nicely tanned Ms. Digard look as ravishing as in this scene.

Donna and Ralph find the servant-girl who greeted them earlier, dead on the floor and realize that something's wrong. As the nude partying and carnal hi-jinks continues, Donna and her boyfriend explore the dark corners of the castle, trying to find out exactly what's going on. We see another act, where a women pretends to be sixteen-years-old at a drive-in with an older guy, strips naked, sucks him off and is killed with a knife by the guy at Uncle's command. Ralph and Donna treck further into the darkness of the castle, and find a headless female body. Earlier the "sixteen-year-old's" head had fallen into the crowd and we had assumed it was just part of the act. Our next act is a hirstute-looking man in a blood-spattered butcher's apron, getting ready to place a naked, dead-looking woman on a bloody table. Another naked female coprse hangs in ropes next to him. He begins to have sex with the 'corpse' on the table, who comes to life and they have, well, living sex. Then the woman in the ropes comes to life as well and killes him with a meat-cleaver. They all bow to Uncle when the act finishes. Another eye-popping scene has graced us.

A full-blown orgy commences. Bodies writhe and grope all over the floor. Uschi's one of them, and the camera certainly loves her. The sex in this film is pretty explicit, in some scenes just short of hardcore. Most of the women are quite beautiful, so those viewers who want the sex angle alone won't be let down one bit. When the revelries are over, Ralph and Donna return and try to convince the guests that murders are taking place and that they're all locked in the castle, but nobody believes them. As a clock chimes, Donna and Ralph faint and we see one last fantasy performance, as, in a forest, a man seduces a woman dressed as a German village-girl, only to scare her with a horror mask, and be killed by her with a pitchfork moments later. I'm not sure how this fantasy could be staged in a forest when we're meant to be in a castle, but The Toy Box is such an hallucinatory film it doesn't really matter.

Donna and Ralph wake up in a fog-shrouded, dark room. Who's facing them but a giant, naked woman! Dwarfing them and holding a tiny candle, the 'giantess', called Sally, seems dazed and confused, even drunk, but looks down on the tiny visitors and tells them all about Uncle's secret. After doing her 'act' she was invited to stay and live forever by Uncle, who is turns out is a collector of toys. Sally had her memory wiped and was made a giant 'toy' by the alien, who runs an intergalactic toy shop on the planet Arkon. A harsh light erupts in the ceiling, and Sally disappears to be replaced by Uncle. The zombified man opens his mouth and an echoing voice can be heard. Uncle is in truth an alien drug dealer, who transports the brains of depraved humans in ecstasy, to his home planet to use as illicit drugs. Ralph had been conned into helping him all along. Ralph wants more answers, and Uncle says he'll have to ask Donna, who has appeared in a scantily-clad outfit in a throne before him, looking calm and serene. What bizarre twist and ultimate fate is in store for our mustachioed hero, and indeed all the trapped party-goers in the castle?

I absolutely adore this film. Sure, it's a bit confused at times but that all adds to the dream-like appeal. I have no idea why Uncle is presented as 'dead' other than to give the actor scary-looking eyes. It kind of reminds me of a cross between Nude for Satan with way more sex and nudity, and an Ed Wood Junior film. Multi-coloured lights and dry-ice-fog abound in many scenes. And then we have the orgies - all beautiful people and all seemingly enthusiastic! Not a bored, jaded participant in the house. Seeing Uschi as a willing participant in the carnality just caps it all off. There's some nice little horror-gore elements in there as well, and the necrophiliac butcher and naked-Uschi-on-the-revolving-bed scenes are like nothing before in the annals of cinema. The music and cinematography are both glorious, with the soundtrack again reminding me distinctly of Nude for Satan's spooky sounds - and that's a good thing.